Sunday was a triumphant and dramatic day for Lacamas Little League All-Star baseball, as all four teams (Majors, Majors 10-11, and Lacamas 9-10 Black and Red) won their respective contests.

It was dramatic for the Majors 10-11 All-star team as starting pitcher, Christian Geigenmiller, received a direct line drive hit to the head from an Evergreen batter at the top of the second inning. The hard-hit ball knocked Geigenmiller to the ground, and ricocheted off his head and bounced to left field.

“It was a tremendous blow,” said coach Jay Ponce, who witnessed the accident. “We were really worried about Christian.”

Brian Quintana, one of the Lacamas parents, rushed to the scene to immobilize Geigenmiller and treat the wound. Quintana, a firefighter and EMT, insisted on emergency assistance. Soon after, the ambulance arrived and Geigenmiller was sent to Southwest Washington Medical Center, accompanied by his mother, Liz.

He was treated , tested and released about an hour later.

“I was really freaked out,” said Geigenmiller. “But I’ll be OK. I think my head stopped a homerun!”

The Geigenmiller family is grateful for the support they’ve received from the community.

Rylan Marshall filled in for Geigenmiller, and Michael Quintana closed. The team beat Evergreen, 4-3, in a hard-fought battle.

“We had good hitting and base running,” said Manager Ed Barbier. “Fort had a home run, and Tayler Shega threw out two runners.”

Majors 10-11 plays Monday at 8 against Evergreen in the semi-finals. The winner of that contest plays in the championship game Tuesday night at Cascade.

July 1, 2012/0 Comments/by Ernest Geigenmiller
https://cdn.lacamasmagazine.com/wp-content/uploads/2012/07/07133135/DSC07615-1.jpg 1064 1600 Ernest Geigenmiller https://cdn.lacamasmagazine.com/wp-content/uploads/2020/01/07074147/lacamas_white_2-300x300.png Ernest Geigenmiller2012-07-01 20:25:002016-02-23 23:27:53All-Star Update: 4 teams win, Geigenmiller rushed to hospital following hit to head
The Lacamas Little League 9-10 year-old Red All-Star team defeated Cascade Friday night 10-2 in six innings. This was opening night for Lacamas Red at the All-Star tournament, which is being hosted by Evergreen.
Caden Wengler started for Lacamas and did an excellent job. He was relieved by Jake Blair, and Josh Mansur closed. Lacamas dominated much of the game and there were some smart infield plays by Mansur, who also hit an over-the-fence homerun.
Lacamas Red also beat Central Vancouver 25-0 in four innings on Saturday morning. They played the bottom of the fourth in the pouring rain.
The Lacamas Majors 10-11 year-old team beat Columbia 18-0 on Saturday morning. Christian Geigenmiller started for Lacamas. He pitched 20 pitches in two innings. Rylan Marshall followed Geigenmiller, and Michael Quintana closed.
Carson Williams was 2 for 3 with two triples. Marshall was 3 for 4 with one double and 5 RBI. Quintana was 2 for 4, and Jimmy Peebles was for 2 for 2 with 1 RBI.
Due to Little League International pitch count rules, if a pitcher is needed to pitch consecutive days he is limited to 20 pitches in a game.
The Lacamas 11-12  Majors All-Star team won their first game of the post-season against Bridge of the Gods, 26-0. They play East County on Sunday at 11 at Central Vancouver Little League.
The Lacamas 9-10 year-old Black team played Evergreen on Saturday afternoon and won, 9-2. Kyle Mosier, Lucas Barbier and Braden Sanville pitched.
All teams play on Sunday.
The 11-12 year-old Majors play East County at 11 at Central Vancouver. Lacamas 10-11 year-old Majors play Evergreen at 10 at Cascade. Lacamas Red starts at 1:30 at Evergreen, and Lacamas Black plays at 1, also at Evergreen.
June 30, 2012/0 Comments/by Ernest Geigenmiller
https://cdn.lacamasmagazine.com/wp-content/uploads/2016/03/07130122/DSC06828-scaled.jpg 2224 3344 Ernest Geigenmiller https://cdn.lacamasmagazine.com/wp-content/uploads/2020/01/07074147/lacamas_white_2-300x300.png Ernest Geigenmiller2012-06-30 18:54:002016-03-03 12:44:45Lacamas All-Stars: All Teams Win Saturday

The Lacamas Majors 11-12 year-old team face Bridge of the Gods at Central Vancouver on Saturday at 11:30.

Christian Geigenmiller started for Lacamas and threw 52 pitches in three innings, and didn’t allow a run. The Lacamas bats looked good, as well, with solid hits by Carson Williams, Rylan Marshall, Grant Heiser, Camden Ford, and others. Marshall went into relieve Geigenmiller at the top of the fourth, and Michael Quintana closed.

Senior Austin Barr received a phone call from New York Mets talent scout, Jim Reeves, offering him a spot with the major league franchise. Barr was picked in the 29th round, 12 pick, and 890 overall. It was an honor, but not what Barr was looking for.

Although most kids would love a shot at making $100,000 right of school, this Stanford University-bound catcher is looking at the big picture. He’s being patient, and continues to work extremely hard.

Over the last several months, MLB talent scouts have been keep close tabs on Barr, getting to know him, his family, his temperament, and of course, his baseball skills. The Mets, Orioles and Marlins have all had their eyes on Barr, but it was with the Mets where serious talks ensued.

In the beginning, nearly a year ago, Barr told the scouts what he would sign for. Top picks receive $7.2 million, and the offers go to $1.8 million for the first rounds. After the tenth round, players are offered a maximum of $100,000.

Throughout the experience, Barr put his stock in Stanford.

“They knew I wouldn’t sign for $100,000,” Barr said. “This was done as a sign of respect to me. They wanted me to be able to say I was drafted by the Mets, and I really appreciate the offer. It’s been a great experience.”

The MLB pro’s started watching him last August as Barr became part of a Royal’s-sponsored tournament team that represented the Pacific Northwest in Long Beach, California.

“We played with the best guys around and they watched us intently,” said Barr. “And I caught really well. Then all winter, I talked to the scouts to do personality tests. I went to countless workouts, and I learned it’s all about developing a relationship with the scouts. And I learned it’s a lot of fun and it’s been like planning two futures – one at Stanford, and one with Major League baseball.”

The experience will serve him well, as Barr plans to succeed at Stanford by continuing to improve his game and study business management, finance or engineering.

He reports to Stanford on September 18 and will meet his dorm roommate upon arrival.

“I really look forward to attending Stanford,” he said. “It’s been a lifelong dream. And the cool thing is in three years I’ll do it all over again. The whole process will start over again when I re-enter the draft. And next time, I want to go first round.”

Barr’s immediate future is to graduate from Camas High on June 15 and then travel with the Corvallis Knights. He’s already off to a good start – hitting a grand slam in Walla Walla last week.

His next game with them is on June 18 in Longview.

“He’s doing very well,” said his father, Gregg Barr. “He’s like a little kid playing baseball. He’s having so much fun. Recently, an opposing pitcher gave Austin credit for the way he’s calling the game. This whole experience has been a lot of fun.”

The younger Barr is grateful for the coaches, teachers and mentors throughout the years.

“I’ve learned a ton these last few months,” Barr said. “I appreciate the relationships I was able to build. I’ve learned how the MLB works, and that not all the guys are making millions. There’s a long road to the Major leagues, and this has given me a new respect. You have to prove yourself and be consistently good for several years.”

Barr also gives high value to his education and hopes to come out in a better position three years from now.

“Baseball doesn’t have to control your life but your success is a product of hard work and a person’s work ethic,” he concluded.

Look out for Barr. He’s just getting warmed up.

Camas High School Senior, catcher Austin Barr, who is Stanford-bound, was just drafted by the New York Mets today. Barr has made known his intentions to go to Stanford, but that hasn’t stopped the Major Leagues from making an effort. He’s that good! 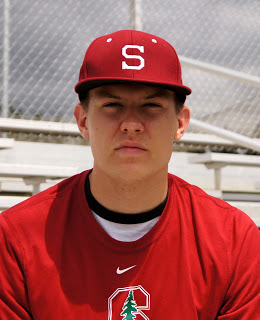 The Camas Barbers traveling baseball team won the Bend Elks Triple Crown Baseball Memorial Day tournament for their age division on Monday, May 28. The team, which is comprised of 13 players from multiple Lacamas Little League teams, were undefeated throughout the tournament. They faced the Beaverton Cardinals, from Murray Hill Little League, in the Championship game, winning 8-4.

The tournament began at 8 am on Saturday, May 26 at Skyline Park in Bend, OR as Camas faced the Suncreek Wildcats. It wasn’t much of a contest as Camas won 19-0 in two innings.

Pitcher Caden Wengler showed strength and accuracy as the first Camas pitcher of the tourney.

The boys played Irish Wilkinson at 10 am and won 20-0, also in under three innings. The tournament had a 20-run mercy rule in the second inning.

“It wasn’t much of a competition on Saturday morning,” said Camas Barber player Jake Blair, who played center field and pitched some during the tournament.

Most of the team stayed in Sunriver and spent Saturday afternoon at the opening of the Sunriver Aquatic Park. It was a cold day but the park was nonetheless packed.

On Sunday, Camas kicked off game 3 at noon against SELCO, which was a local team. Camas struggled in the first inning and gave up four runs, only to bounce back and ultimately put 20 runs on the board in three innings. Camas won 20-4.

“We’re really proud of these guys,” said Coach Jeff Mansur. “They’re all great hitters – and they all know how to play baseball. They’re competitors.”

Game 4 was played Sunday at 4 versus St. Helens Black Sox and that gave Camas its most competition to date, but Camas still beat them 17-1.

The 4-0 record moved Camas to semi-finals on Monday morning as the No. 1 seed. They played No. 4 seed Sandy and beat them 16-4 in a full game. There was some controversy as parents claimed that Jordan Geigenmiller’s pinch running was illegal. It was overruled twice by the head umpire and the tournament director. There was excellent pitching by Drew Ott.

Being the No. 1 see gave Camas home field advantage going into the Championship game against the Beaverton Cardinals from Murray Hill Little League. This is the same league that sent their Majors All-Star team to the Little League World Series in 2006 and placed third.

Again, Wengler showed up and only allowed 4 runs. The kids kept batting and fighting throughout and were behind 2-1 at the top of the second inning. There were excellent defensive plays by shortstop Josh Mansur who caught one jumping in the air. Blair made two outstanding catches at centerfield, and Christian Knuth had a lot of fun at third base. Camas beat Beaverton 8-4.

The championship win qualifies the Camas Barbers for a trip to the Triple Crown Baseball series in Las Vegas.

The Varsity Baseball team won another close game 4-2 over Prairie. Gabe Heredia picked up the win on the mound pitching two innings of scoreless relief.

Tyler Hallead pitched a scoreless 7th inning to get the save. Hallead was 1-for-2 with an RBI in the game and the offense drew nine walks from Prairie pitchers (2 with the bases loaded).