The team heads to State competition in Richland this Saturday to compete against seven other teams.

Pitcher Emery Miller did well, and was backed up by a solid defense, allowing only one run early in the game.

“We were the number one seed in league, 19-0, then we played Columbia River for tournament play, we beat them, then we played Hudson’s Bay, which qualified us for State in Richland,” said coach Dale Lundy. “Four teams come from our area, and we’ll play the best four teams from Spokane.”

Taija Souki scored early in the game, and was followed by Sophie Franklin, who brought in the second run. Addison Cagle scored the third run, and Maddie Ellis scored the fourth. Sophie Franklin scored again (fifth run) by sliding into home; and Megan Bauer scored the final run of the game.

“We all worked hard to support each other,” said Emery Miller, who pitched the entire game.  “We put in the time, and the work.”

Baseball teams are divided into three age groups: 9/10, 10/11, and 11/12. Softball teams are organized into three groups: Minors, Majors, and Juniors. The All-Star teams will compete in District level competition culminating in a winning team that will claim the District title. The champions in the older divisions will compete at the State level, and have the potential to play in the World Series, in August. 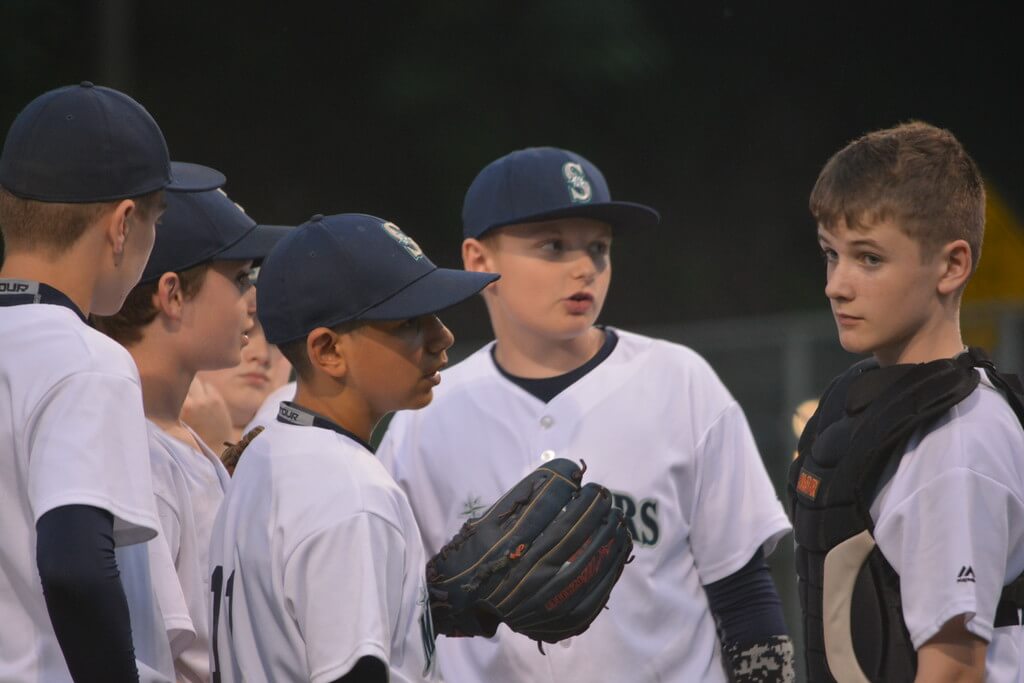 Camas Little League Mariners players talk during a time out.

Arlington won the game 2-1 at the bottom of the seventh inning in a game that saw some amazing plays, including an Arlington outfield catch that denied Camas a home run in …the fifth inning that would have tied the game.

Second baseman Lena Richards dove to catch a line drive past first base, and there was amazing pitching by Harli Hubbard.

“Camas had an excellent season,” said Papermaker fan Chris Wengler, who watch the game live via online streaming. “They have nothing to be ashamed of. They fought to the very last out and played well. It was a battle of powerhouses in the State.”

This caps an end to a stellar 2013 Papermaker season, in which Camas won league and placed second in Bi-Districts.

Camas held its 1-0 lead until the seventh.

“We had come by a few sticky situations but no runs,” said Richards. “Rio Smith cut off a base hit to stop a runner at thrid. Then in the seventh Cailyn Grindy got walked, Amee had a bunt. I got an infield single and Mackenzie got a base hit RBI into right. We were up 2-0. Erin got a hit but no more runs. We held them in the bottom to win.”

The Papermakers play Arlington today at 5 pm. The game will be streamed live online at www.wiaa.com

The Camas High School Varsity Softball team heads to State competition in Spokane on Thursday as the No. 2 seed, after losing in the Bi-District Championships in Spanaway over the weekend.

The Lady Papermakers played four games (3-1) in the Bi-District tournament and held Emerald Ridge 1-0 until the bottom of the seventh inning when Emerald got off two hits to win the game 2-1.

Camas faces Lake Stevens on Friday at noon as they enter the double-elimination tournament.

“We can do this,” said Papermaker second baseman, Lena Richards. “We’ve had such a great season, but it was crushing to lose to Emerald Ridge. This is our second loss to them.”

The team has had an incredible season winning 19 games, and losing only five.

The last time a Camas softball team won a state championship was in 2002.

Their record earned them a spot in the District Championship game next Tuesday, May 14 at Heritage High School against the winner of Monday’s 6pm game.

Win or lose the girls will play on Friday, May 17 at 10 am in the Bi-District Tournament. 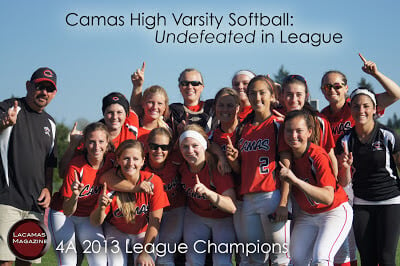 May 9, 2013/0 Comments/by Ernest Geigenmiller
https://cdn.lacamasmagazine.com/wp-content/uploads/2016/02/07130304/Softball.jpg 960 1280 Ernest Geigenmiller https://cdn.lacamasmagazine.com/wp-content/uploads/2020/01/07074147/lacamas_white_2-300x300.png Ernest Geigenmiller2013-05-09 21:31:002016-02-28 05:49:49Softball: Camas Girls Varsity Undefeated in League
With Monday’s win against Heritage, the Camas High School Varsity Softball team clinched the 2013 4A League Championship. The girls have had an incredible season and will continue to play on Wednesday, hosting Battle Ground.Though they take each game at a time, the girls have their eyes set on winning the state title. More to come. 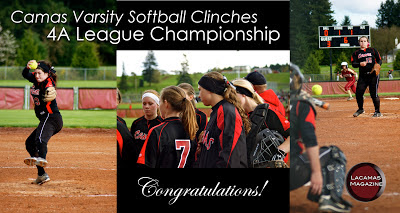 Using their powerful offense and solid defense to clobber the competition the Lady Papermakers sent each team home on mercy rule four times in a single week.

On Monday they played Skyview. Wednesday was their perfect game against Union. Thursday they faced Wilson, and tonight was Evergreen. So far, the girls are 8-0 in league play.

“We are just begun to find our rhythm as a team. We are picking each other up and playing as a unit,” says Lena Richards, a member of the Varsity team. “We are happy with the success but not finished. We are looking at the next game but won’t be happy until we get the state title we believe we can have.”

They have two more league games, one this Monday at Heritage, and then another on Wednesday hosting Battle Ground. Wednesday is also Senior Night, when the team pays tribute to MacKenzie Farnham, Erin Tauscher, Amee Aarhus and Alecia Huegil.

Friday’s win earns Camas Softball a spot in the District Championship game, which is a week from next Tuesday. 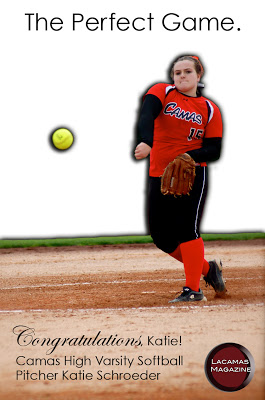 It’s been a great season for the Camas High Varsity Softball team (11-3) and for pitcher Katie Schroeder, Wednesday was absolutely perfect.

Hosting the Union Titans, Schroeder struck out 14 of 21 Titan batters and allowed zero hits. No Titan ever reached first base.

Schroeder and catcher Erin Tauscher made it look easy, and the Camas defense did their job defeating Union 9-0.

“It’s so awesome,” said Schroeder. “I don’t even have words to describe the feeling. My team played such good defense there is nothing more I could have asked of them. They put up the runs and made the essential plays. It was perfect.” 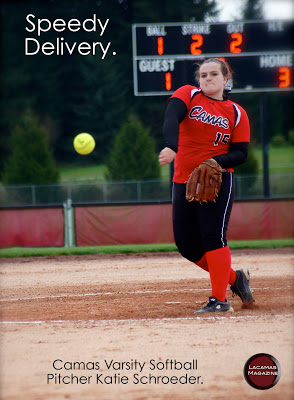