BATTLE GROUND, WA — The Camas High School Track & Field team dominated the competition at Saturday’s Tiger Invite, with the boys scoring 121.15 points, and the girls scoring 112 points overall. It was a large event with 18 schools represented. 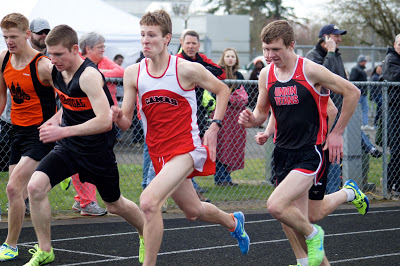 Jabari Marshall of Skyview won the Javelin at 170-01.

Camas High School Track & Field hosted Skyview at its first meet of the season in some very adverse weather conditions.

“It was a great meet tonight (minus the swim meet),” said Camas Track Coach Alisa Wise. “Skyview was tough as we expected! Great job to all athletes, thank you to all our parents and volunteers who braved the northwest elements!”

The Lady Papermakers won the 4×100 Relay with a time of 54.46. The team consisted of Knight, Murata, Gray, and Amanda Shi.

The Lady Papermakers also won the 4×400 Relay with a time of 4:24.78. The team was comprised of Knight, Parson, Pudlitzke and Efraimson.

Camas also took the top two places for the Triple Jump, with Lauren Neff leading the way, followed by Murata. 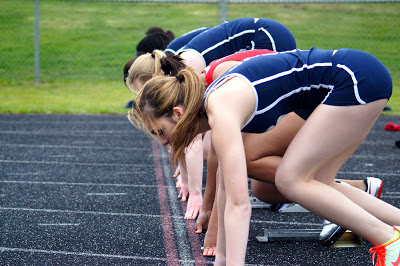 Skyview won the 4×100 Relay with a time of 44.31. The team consisted of Forrest Russell, Brandon Twitchell, Kalvin Johnson, and Kevin Washington.

Camas High School’s 2013 Track & Field season kicks off Tuesday, March 19 at 3:30 at Cardon Field and will compete against Skyview. The students have been working hard since late February to prepare, and fans are looking forward to seeing the Papermakers back in action.

Runners Alissa Pudlitzke, Alexa Efraimson and Andrew Kaler recently and others have continued to run and develop during off-season.

Long-distance runner Tucker Boyd is excited about the first meet and is hosting a special Fitness Camp during Spring Break to teach younger kids about the sport.

The Track & Field team continues to grow and Coach Alisa Wise is excited for the season to begin.

The nation’s young runners, from all regions, competed in this Cross Country meet to see who was the best of the best. Evergreen’s Youth team (13-14 year-olds) placed 12thoverall out of 17 teams, while the Midget team (11 and 12 year-olds) placed 10thout of 22 teams.

Individually, Emily Wilson, 12, who attends Skyridge Middle School, competed in the 3000m and placed 13thout of 263 runners, with a time of 11 minutes, 33 seconds.  She earned the distinction of being an “All-American.” Impressive. On the Youth team, Marley LeFore placed 32ndoverall out of 260 competitors.

“I felt good afterward, “ said Wilson. “I’m proud of myself for how far I’ve come. It was a good experience.”

Wilson has only been running competitively for 15 months and has played soccer for years.

“It was cool to see who was the best of the best,” Wilson added.

LeFore also had a great time.

“It was an amazing experience because there were so many girls that have the same talent as me,” LeFore said. “And I got to test my talents to see how good I was. From this experience I learned that I should not underestimate myself and to worry about my race and not how others are running.”

LeFore added: “Our team ranked high because we all sacrificed and worked hard! All of the girls are like my second family!”

Evergreen Storm team member, Lauren Mahnke, said, “It was a great weekend and a great experience to run with girls from all over the country!”

The experience has inspired her to keep running. She is already sad there will be no Storm practice on Monday.

“The altitude was tough, but we ran through it,” Mahnke added.

The team practices at the Union High School track, and is coached by Mike McKinney.

The Camas Track & Field team had a successful night at the Jon Ingram Twilight Meet at Columbia River on Friday, taking home two trophies and a new school record to boot.

Lauren Neff capture third place in the Girl’s High Jump at 5 feet; she got second place in the Triple Jump. And Paige Jackson got the third spot in the Pole Vault event at 9 feet.

The team competes against Prairie and Hudson’s Bay on Monday, and then head off to Oregon Relays in Eugene, OR on Friday.