Cardon Field, Camas, WA — Both the Camas Boys and Girls teams defeated Union High School in their first Track and Field Meet of the season during a cold, wet, stormy afternoon that saw the heavens drop buckets of water, mixed in with a little lightning and a bit of thunder.

“It was a total monsoon,” said runner, Ben Peterson. “We did our best to stay dry, plus it was nice to get the win.”

Here are the official results: 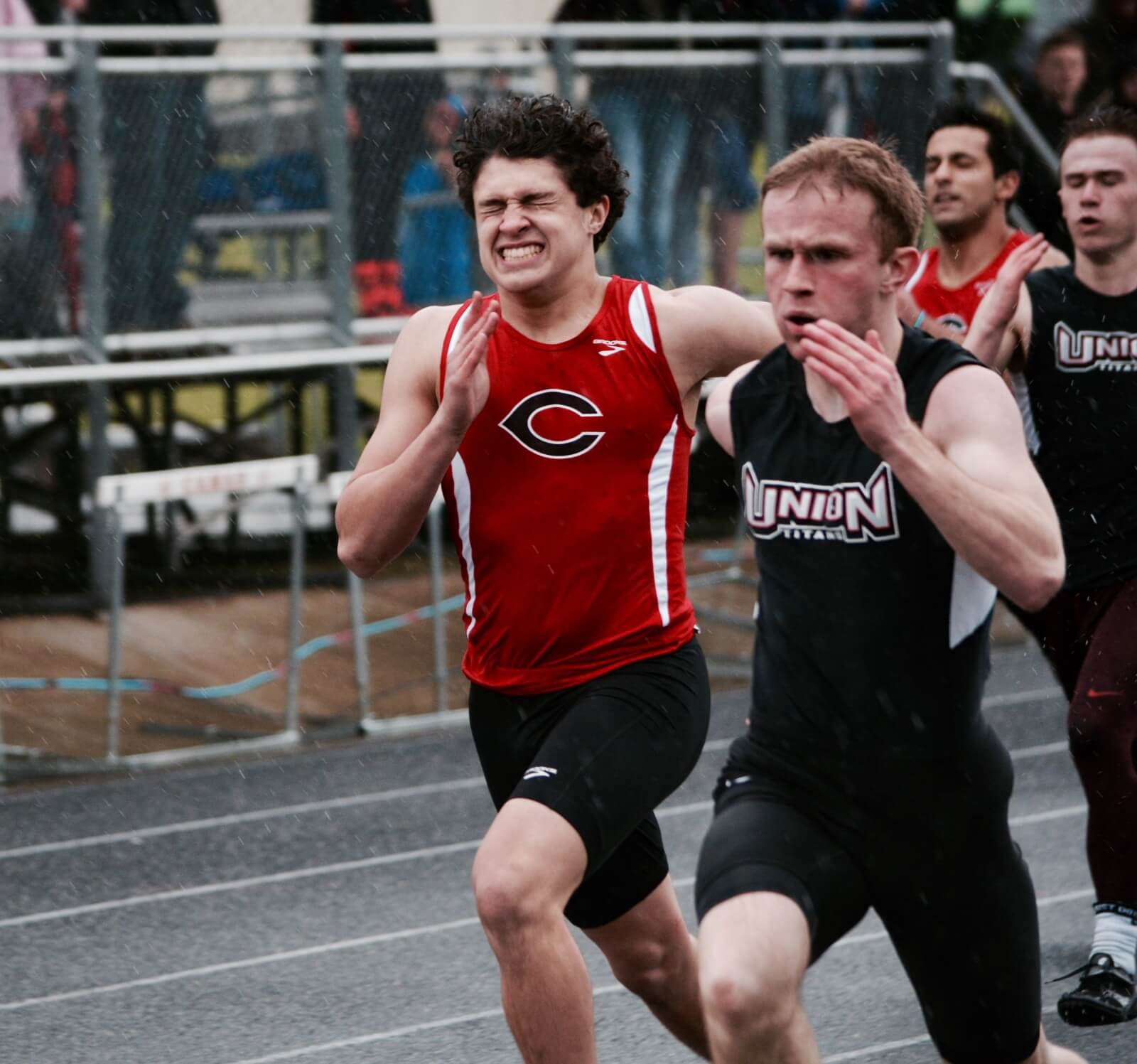 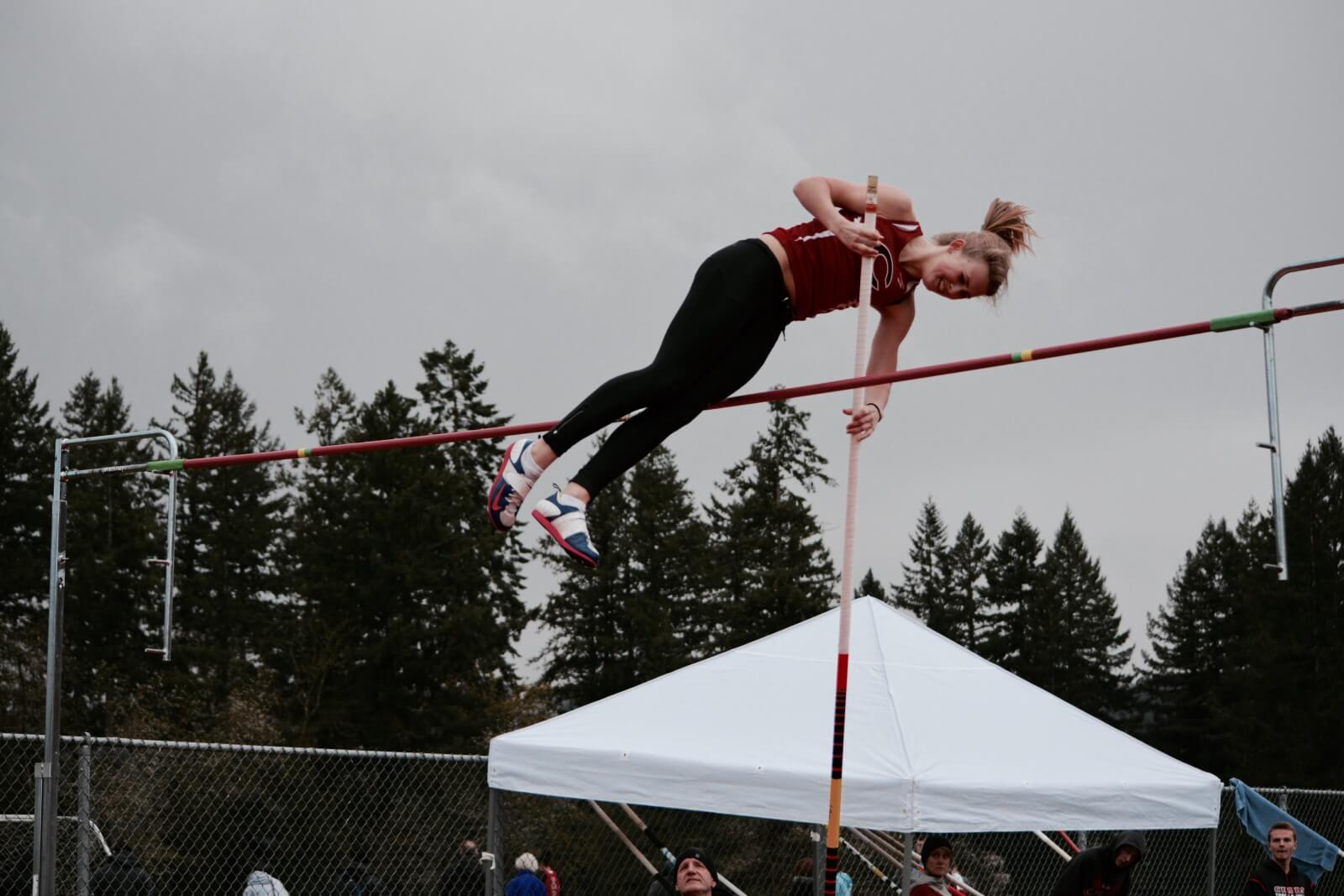 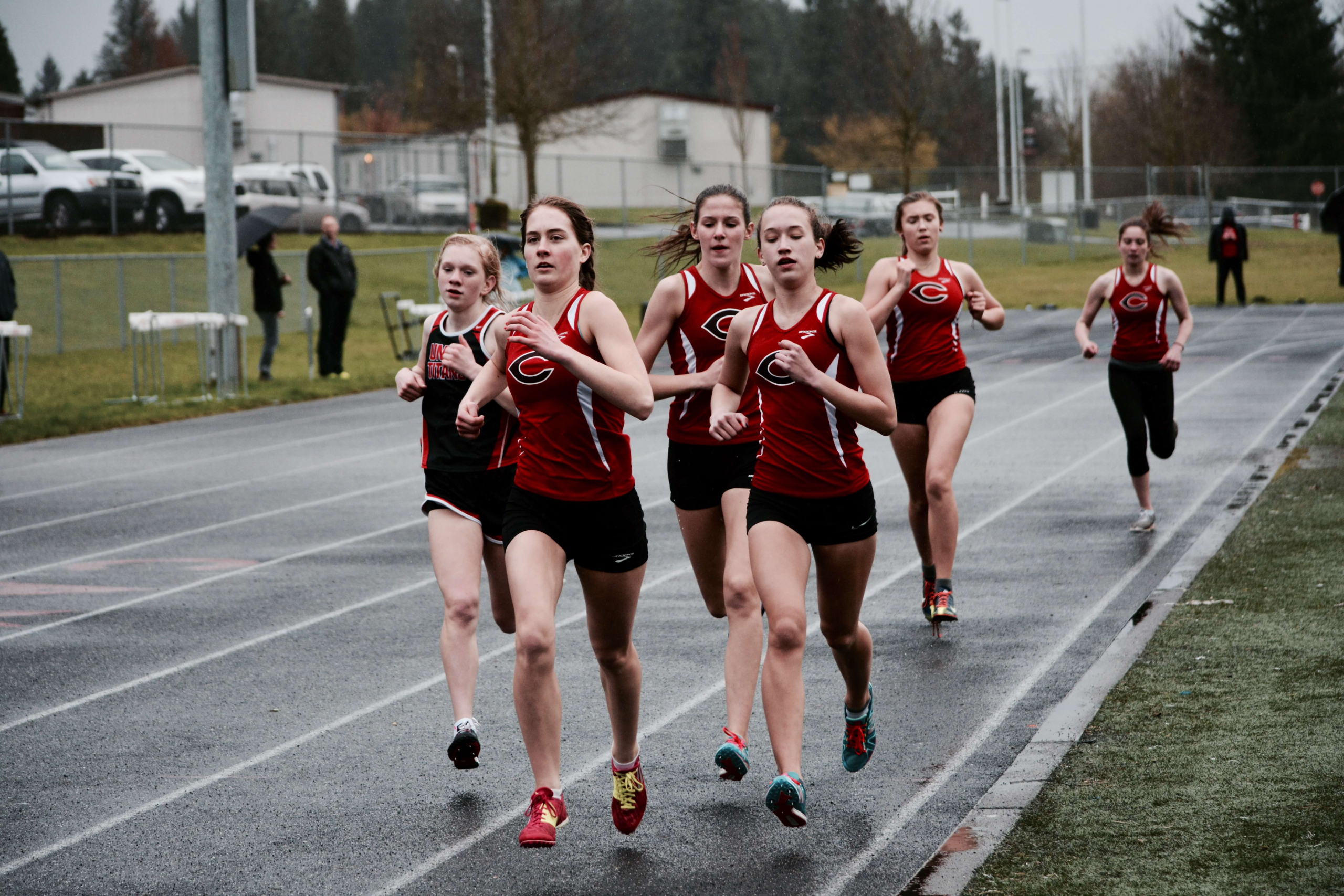 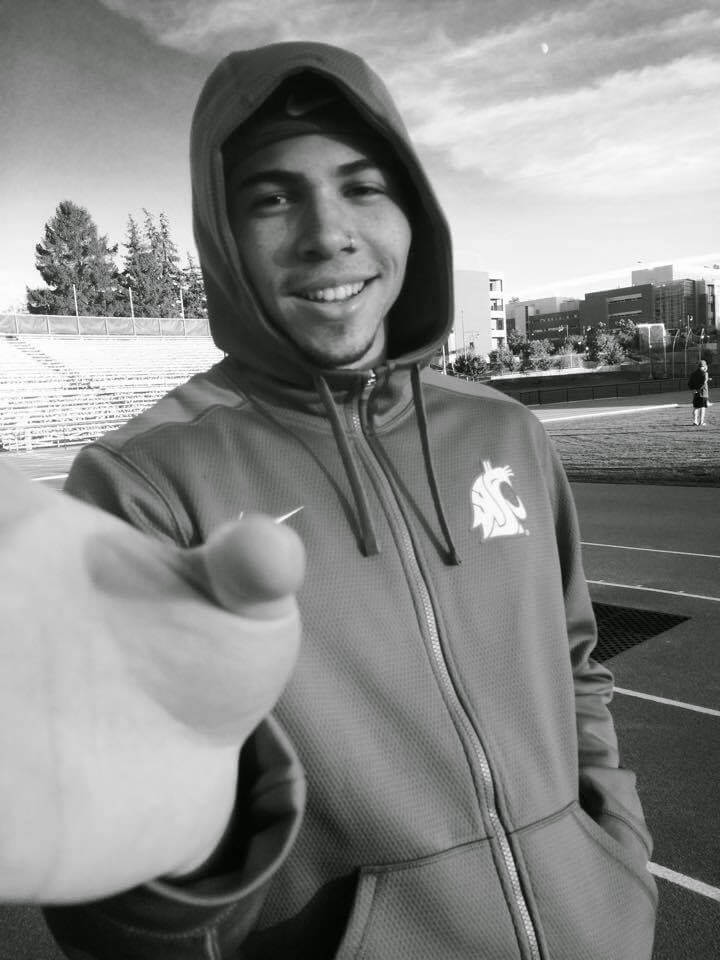 The 2013 Camas grad has his first collegiate inters-quad meet coming up this Friday, and he and his team have been rigorously preparing. Anderson will be competing in multiple events, and his coach has been helping the team get ready physically – and emotionally for the meet.

The PAC 12 is very competitive, and Anderson knows it.
The collegiate indoor season begins January 17, and Anderson has spent the better part of the year training each day from noon to 3:30, then spending 90 minutes lifting, and then an hour stretching and doing preventative care.
The freshman and Architecture major attends class in the mornings so he can meet the ambitious goals that he and his coach have set for himself.
He’s put on 15 pounds of muscle, feels stronger overall, is confident of his abilities and wants to place in the Top 8 for indoor events, and be in the Top 6 for outdoor events.
For Indoor, he’ll be competing in the 60m Sprint, Shot Put, Pole Vault, 60m Hurdles, Long Jump, High Jump and the 1000m run.
For Outdoor, he’s planning to compete in the Decathlon. 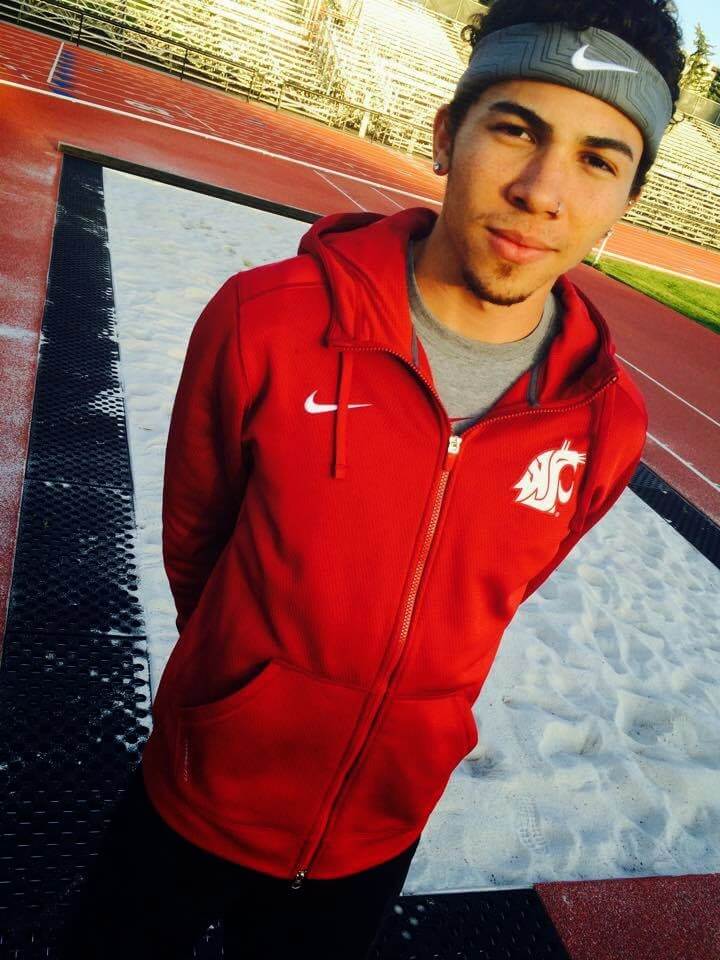 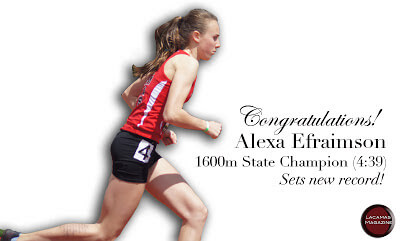 Camas High School runner Alexa Efraimson, a sophomore, won the 1600m event at State competition Thursday with a time of 4:39.25, setting a new State record along the way.

According to her coach, Alisa Wise, Efraimson started to separate herself from the pack shortly after the second lap.

Efraimson has won a string of track events these past two track seasons, setting meet records and impressing fans.

In total, 16 Papermakers qualified for State competition this coming week (May 23-25) at Mount Tahoma High School.

Senior Grayson Anderson qualified for State in the High Jump (6’) and 200m (23.02) and is looking forward to his final high school meet.

“Into state I want to qualify for the finals in the 200,” says Anderson. “I feel like that would be a great conclusion to my season for sprints. As for the High Jump I want to win it all. I want to be the state champion. I placed fifth my sophomore year and third my junior year and I just feel that this year it’s my turn to take home the gold. I have had such an incredible season here at Camas so it’s hard to summarize the track and field program. We are more than just a team – we are a family. We win together and we lose together. Before this season I thought that track was an individual sport. Now I know that it’s so much more than that. I came to Camas High School specifically for the track program and it has been the best decision I’ve ever made.”

“Well I was pretty happy about my performances this weekend,” said Kaler. “I had personal records in both these races, and coming into both of them I was not ranked to make it to State. However, I knew that I could make it and so I went out there with the attitude that I was going to make it, and it ended up happening, which I was psyched about. Looking ahead to these next two races at State, I know that there will be a lot of great guys competing, and so I hope to just go out there and get into the pack and see what happens. I am really excited and I hope for the best for me, my teammates, and even the people from our district.”

Senior Lauren Neff placed fifth in the Long Jump (5’) while Freshman Caleigh Lofstead placed fifth (10’) in Pole Vault, — both are State qualifiers. Sophomore Nicole Corbett qualified for State in the Discus (133’-1”), as did Seniors Amber Corbett (second place at 130”-4”) and McKenna Jackson (111”-0”) for Javelin. Amber set a new school record for Javelin.

“It was a roller coaster ride at Regionals,” said Camas Co-Head Track Coach Alisa Wise. “These kids really worked hard in the Prelims, which are brutal with everyone fighting to get into the finals. A lot goes into strategizing for these meets. It’s about managing their schedules, and we just have to play it really smart and careful.”

“I trained a lot in the off-season,” says Gilbert. “And really enjoyed the running! And I’m just doing some tune-up stuff to stay confident (for State).”

Wise isn’t used to having such a few number of kids compete at State, and she attributes that to the change from 3A to 4A this school season.

“4A has a higher concentration of quality,” Wise says. “Where 3A may have one to three great times, all the 4A times are fast! But the bottom line is the kids who qualified are the kids who will have the best chance at scoring.” 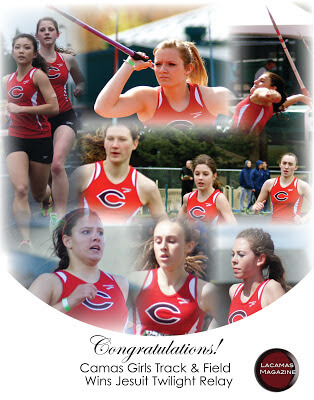 Co-Head Track Coach Alisa Wise was ecstatic about the results. She said Camas came from behind several times, chasing down a Jesuit runner and changing the overall outcome.

“They were amazing!” she said.

Camas Track and Field will compete in Districts this coming week. Details to come. 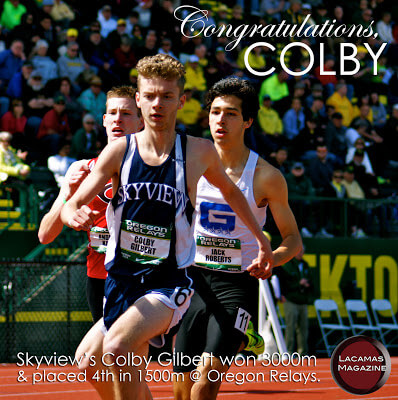 “This has been totally amazing,” said CHS sophomore, Ryan Gunther, as he watched college track stars run at the field, which is home to the Track & Field Olympic Trials. “Look who’s here and look at what they’re doing.”

Gunther competed in the 300m Hurdles near the end of the meet.

The Papermakers sent 30 of their top track and field athletes to compete at the annual Oregon Relays, and Camas continues to impress.

Gunther was in awe of college track stars Arthur Delaney (U of O), Sam Crouser (U of O), Mike Berry (U of O), among others. But he was equally impressed with his own teammates.

“Did you see how these girls came from behind?” said co-Head Track Coach Alisa Wise. “Look at what they did. We’re so proud of them.”

Gunther was equally proud of the DMR team.

“They’ve got something special,” he added. “Not sure of what they’re made of, but it’s really cool.”

“And it wasn’t even her personal record!” Gunther said, smiling. “She’s got more in the tank.”

Triton Pitassi placed second in the Hammer, while Blane Behrent earned a fourth place finish in the Pole Vault.

“Our team continues to progress and develop,” said Wise. “There’s more to come.” 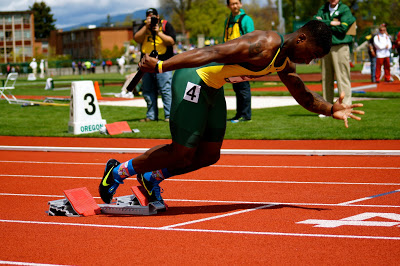 Lauren Neff has been working to make a school record in the High Jump — and she succeeded Tuesday afternoon as Union hosted Camas at their latest Track & Field meet. 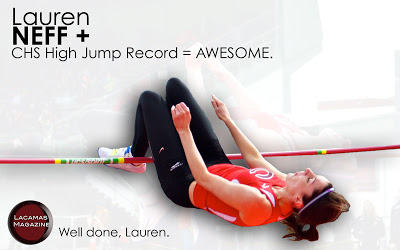 As the Camas Boys and Girls Track & Field teams swept titles at Friday’s John Ingram Twilight meet at Columbia River, Camas’ Grayson Anderson was selected the male athlete of the meet, as well. A total of 10 teams competed at the meet.

Adna’s Regyn Gaffney was named girls athlete of the meet.

Camas Track & Field team dominated Thursday’s home meet against Evergreen, as the boys won with 109 points to Evergreen’s 36, and the girls won 114 to 36.

It was a warm, clear and sunny day, and quite the contrast from a week earlier for the season opener meet.

The 300m Hurdles was razor thin as Kimi Knight and Jordan Davis were even throughout the intense race. Knight won with 47.24 to Davis’s 47.47. It was THAT close. Tamaki Murata placed third at 49.82.

Grayson Anderson was the clear winner in the High Jump at 6’6”. David Neff and Josh Ryan placed second and third, respectively.

The next track meet John Ingraham Twilight Meet on April 12.