KELSO, WA – The Camas Boys Swim Team won the 4A District Championship Saturday at Kelso High School, beating five other schools and breaking multiple records along the way. In total, the Papermakers earned 398 points, as several get ready for State competition this coming weekend.

“It’s been a real successful meet,” said Ulmer. “We’ve all worked well together, and I’ve loved it. It’s my last meet at this pool, and we’ve made the best of it. These past four years have been an amazing experience, and it’s been so great getting to know the swimmers from all the other schools.”
Calwell won the 100 Breast event (59.08), but fell just half a second of setting a meet record. Skyview’s Jake Breuer placed second (1:01.75).
The Camas boys also set a new meet record in the 400 Free Relay (3:21.33), which was the final event of the meet. The team included Calwell, Kim, Luke Albert and Fadlovich.
Camas Coach, Mike Bemis, said they’re sending 8 swimmers to State this weekend.
“We’ve had a great meet,” Bemis added. “The boys really stepped it up.”
State competition will be at Federal Way, WA.

Papermaker Fadlovich won the 400 Free (4:29.30), and Xiu placed second (4:29.79). Camas also dominated the 200 Free Relay, winning with a time of 1:42.58. The team consisted of Mark Kim, Tom Utas, Calwell, and John Utas.
The younger, less experienced swimmers are also making improvements in their times.
“Sullivan Carrick has really improved since he first joined the team,” said John Utas. “He’s really starting to like it. I hope he stays because he’s a good guy to have around. I’m glad he joined the team.”

Ulmer also won the 100 Back event, with a time of 1:04.71. Calwell also bested the 100 Breast (1:09.87).
And, for the final event, Camas took the top two spots in the 400 Free Relay. The winners were Ulmer, Tom Utas, John Utas, and Jeff Fadlovich. The second place team consisted of Luke Albert, Max Urbanek, Andrey Khabibrakhmanov, and Finn McClone.
“I just wanted to publicly say thank you to all the boys on the team for the encouragement they give to Brian Andrade, a new member on our team, “said assistant coach, Leslie Dahlen. “They have all stepped up.”
Andrade has autism and has really enjoyed being on the team.
The boys compete again next Wednesday at Lacamas Swim and Sport Club.
January 21, 2015/0 Comments/by Ernest Geigenmiller
https://cdn.lacamasmagazine.com/wp-content/uploads/2013/02/07134021/DSC04452-1.jpg 1064 1600 Ernest Geigenmiller https://cdn.lacamasmagazine.com/wp-content/uploads/2020/01/07074147/lacamas_white_2-300x300.png Ernest Geigenmiller2015-01-21 22:53:002016-02-17 22:13:16Swim: Papermakers Stay Undefeated
VANCOUVER — The Camas High School boys swim team won Thursday’s dual meet against Hockinson, Skyview and Fort Vancouver, and set a few state qualifying times along the way.
The Papermakers set the pace, winning the first event, the 200 Medley Relay with a time of 1:45.03. The relay consisted of Lucas Ulmer, Tom Utas, John Utas, and newcomer Andrey Khabibrakhmanov.
Camas Senior Kasey Calwell bested the 200 Free with a time of 1:47.88. “It’s been a great meet,” said Calwell. “We’re putting in some solid swims.”
Hockinson’s William Morris won the 200 IM shortly afterward. Papermaker Senior, Lucas Ulmer, won the 50 Free, with a time of 23.11 seconds.
“We’re having a great season,” said Ulmer. “We have a lot of new swimmers. It’s so great to have Brian Andrade on the team due to his disability. He really inspires us. We love having him.”
Ulmer made state cuts already in the 100 Free, 100 Fly, and 100 Back.
Papermaker sophomore, Tom Utas, won the 100 Fly with a time of 56 seconds. Calwell then earned a state qualifying time in the 100 Free (49.97 seconds). It was his fifth state qualifying time this season.
Camas freshman, Mark Kim, won the 500 Free and made a state qualifying time with the win.
The Camas boys also won the 200 Free Relay (1:32.44). The relay team consisted of John Utas, Calwell, Tom Utas, and Kim.
Skyview’s Jake Breuer won the 100 Back (55.8). Hockinson’s Jonah Rodewald won the 100 Breast (1:05.68).
And, in the last event, the Papermaker 400 Free Relay of Ulmer, Tom Utas, Kim and Calwell handily beat the competition with a time of 3:21.06. 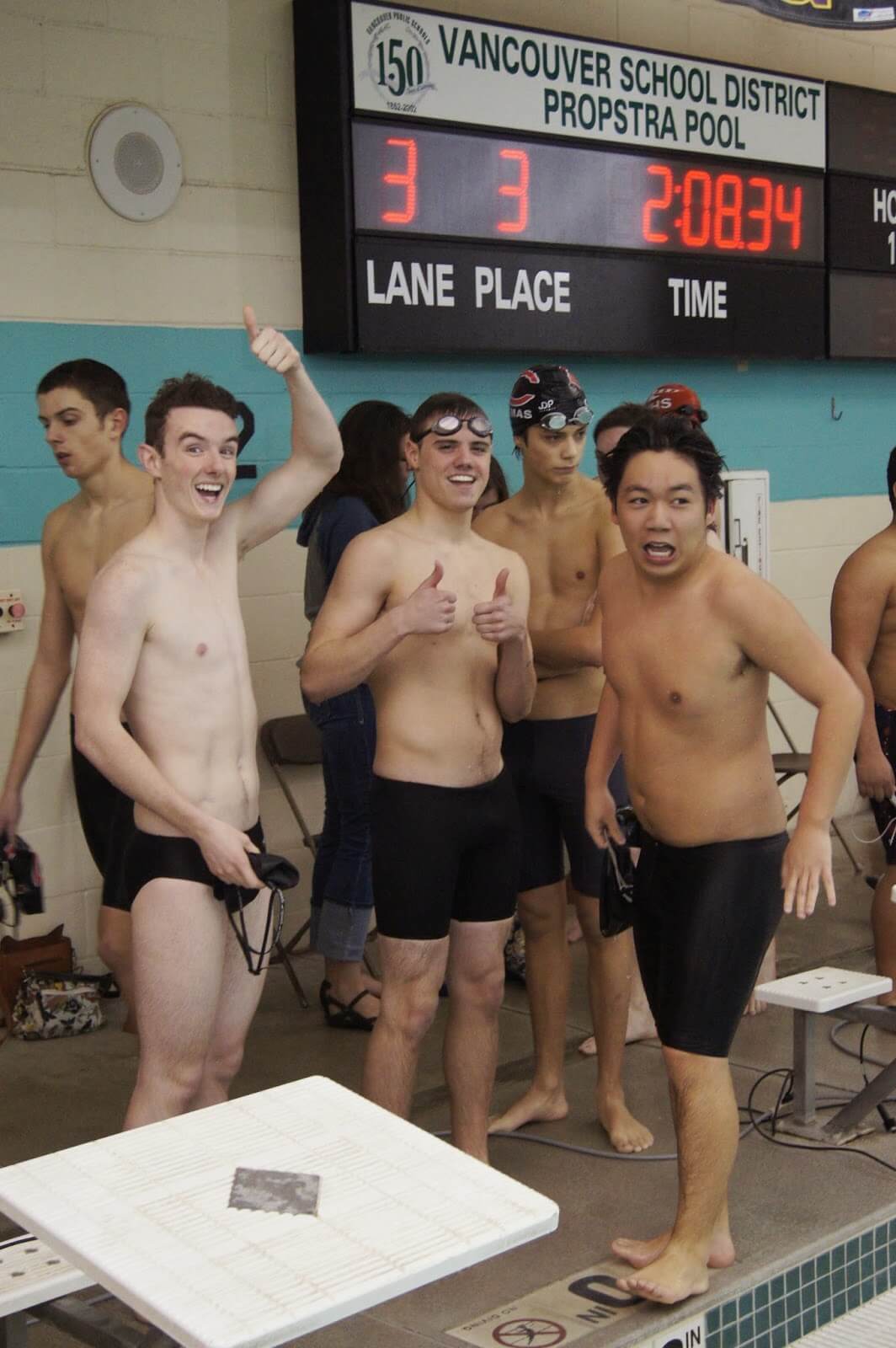 The team has added several new swimmers, including Andrade, Kim, and Khabibrakhmanov, along with Ian Pinch, Sullivan Carrick, Finn McClone and Max Crowson.
Coach Mike Bemis is pleased with the performance of the boys mid-season, and is looking forward to next week’s major meet against Union — to be held at Lacamas Swim and Sport Club.
“It’s sad that this is coming to an end soon,” Ulmer added. “But it’s been great to have a successful four years at Camas. It went by so fast!”
Calwell will be swimming for University of California — Santa Barbara (UCSB) this fall. Several other seniors haven’t announced their future plans as yet.
January 16, 2015/0 Comments/by Ernest Geigenmiller
https://cdn.lacamasmagazine.com/wp-content/uploads/2012/02/07131956/DSC09480-1.jpg 1064 1600 Ernest Geigenmiller https://cdn.lacamasmagazine.com/wp-content/uploads/2020/01/07074147/lacamas_white_2-300x300.png Ernest Geigenmiller2015-01-16 20:54:002016-02-17 21:55:55Camas Boys Swim Team Wins Dual Meet at Propstra

We interviewed 21 Camas Football players for a really fun, candid look at the 2014 season and how a small town has shaped the lives of so many youth.

The video will be released this week. 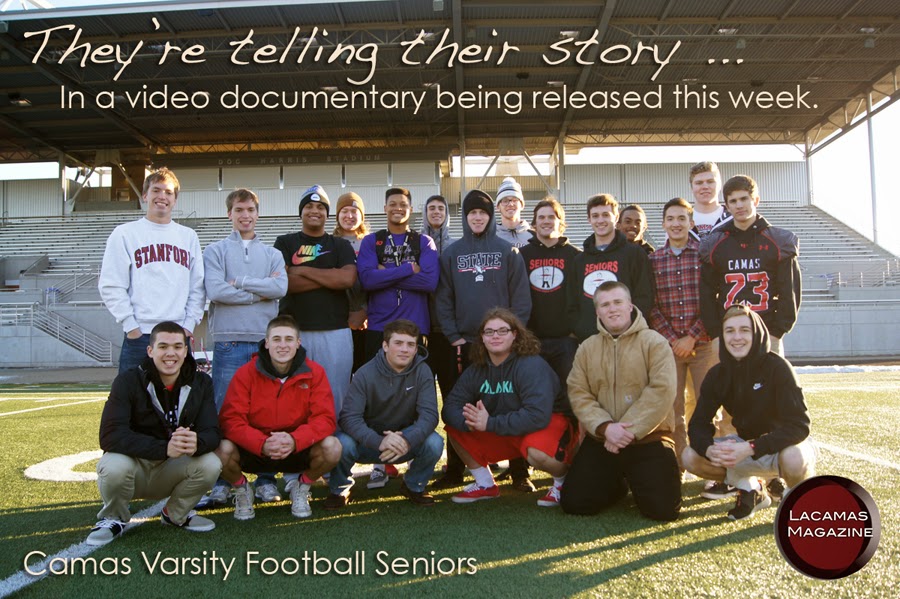 We’ve been covering Camas for several years, and when you get right down to it, these kids are great! Personally, I’ve had the privilege of watching so many of them grow up in Camas. We’ve seen them in kindergarten, Little League, Pop Warner, CCYF, scouts, school, church, and they’re quickly becoming adults. These boys turned into classy young men. Go Camas!

We encourage you all to list reasons why the Papermakers rock. More pictures and videos coming. 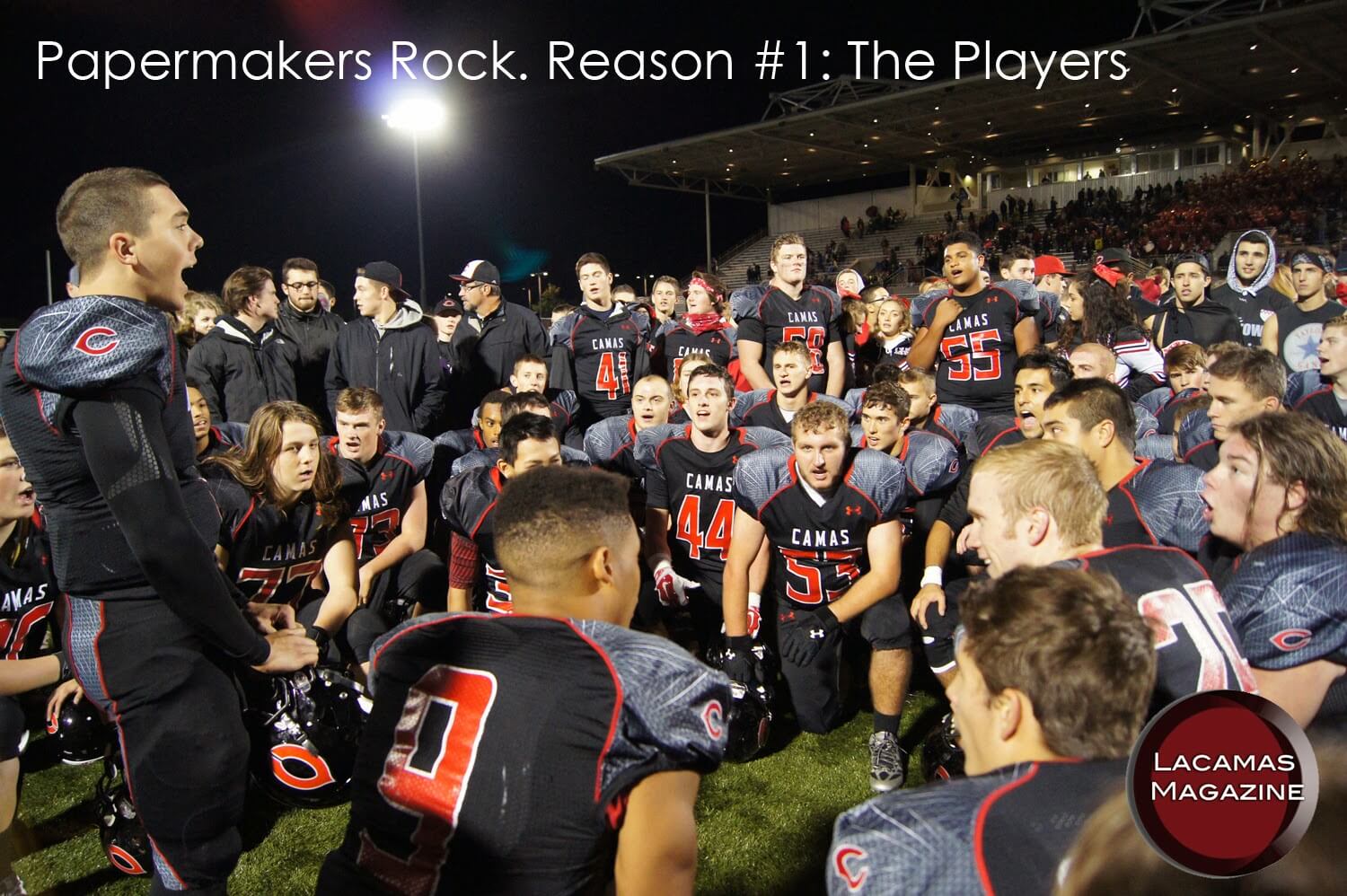 If you missed it opening weekend, the CHS production of “Grease” is back for its final three showings this weekend.

Times are as follows: Friday at 7 pm, Saturday at 2 and 7 pm. The students and director Sean Kelly will impress you. 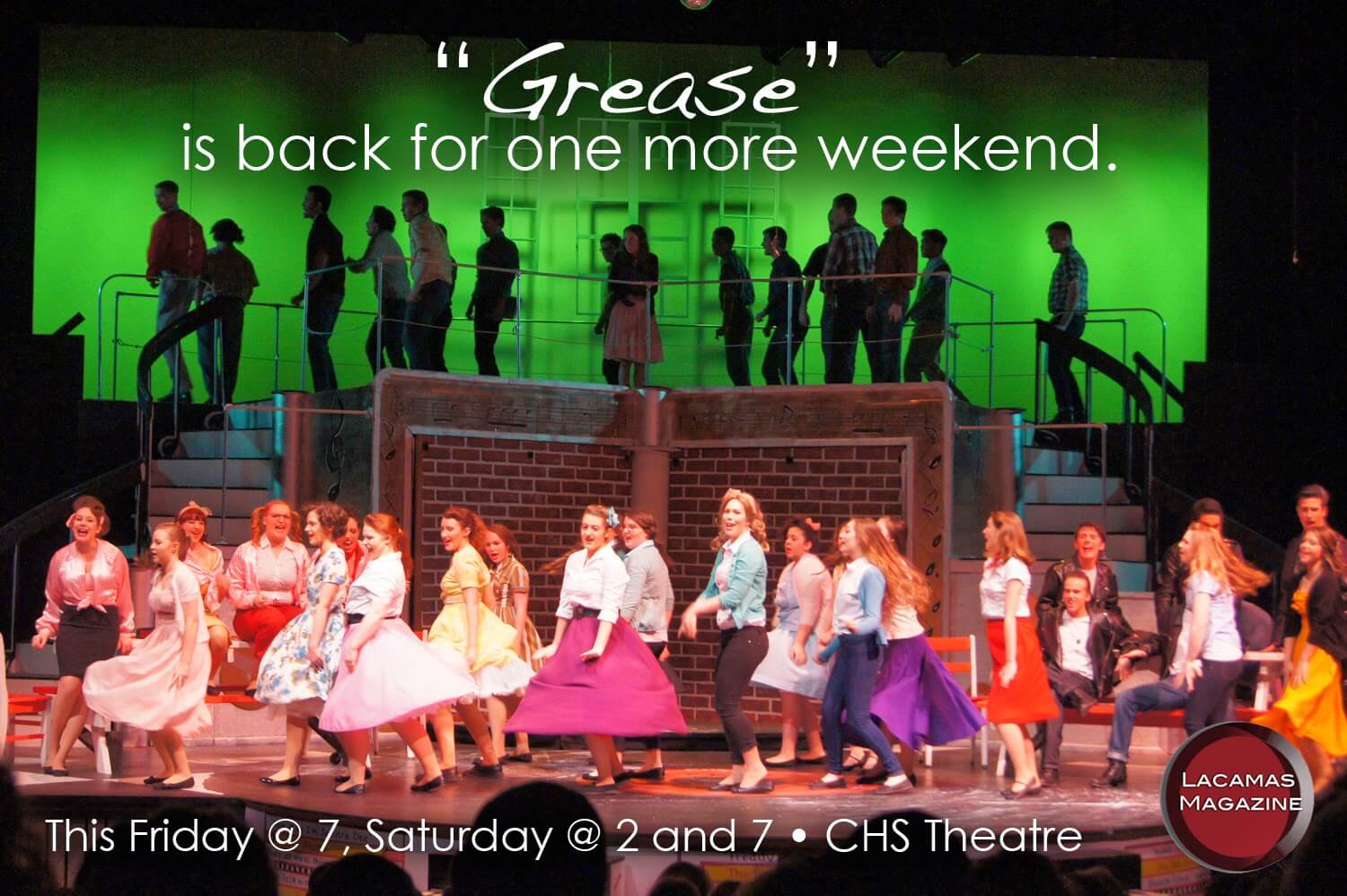 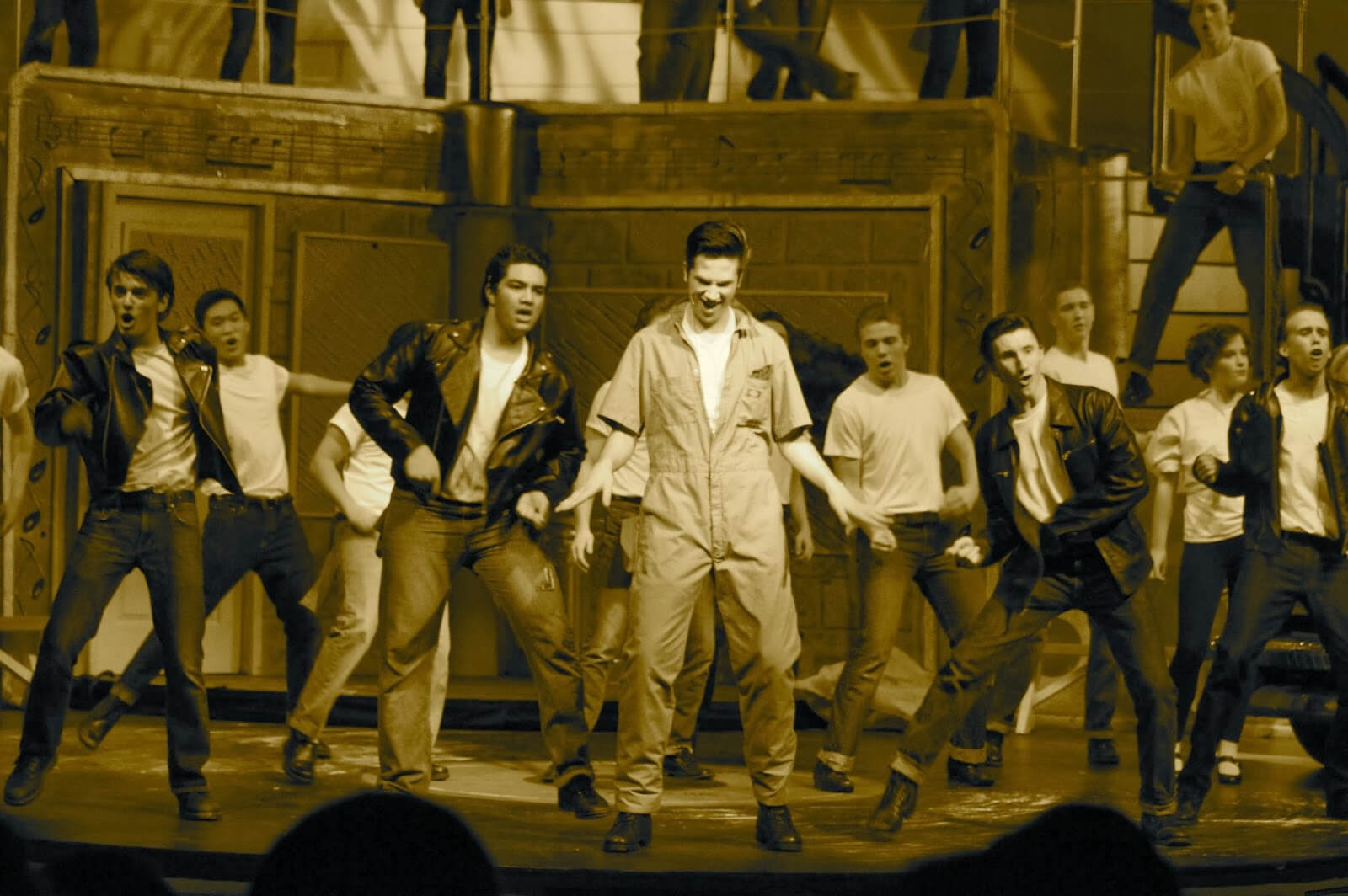 Kelly and company’s version of “Grease” was lively, entertaining, creative, filled with comedic moments, and a little irreverence.

What impressed me was the timing. These youth have been blessed some amazing talent and it showed during the two-and-a-half hour production.

The actors sprang to life with each scene and appeared to have their lines down quite well. And many had a penchant for singing. It was a lot of fun to watch.

Christian Gmelin did an excellent job portraying “Danny,” whose character’s personal struggles come to life during the performance. His affection and often times confusing relationship with “Sandy,” which was played brilliantly by Rachel Smith, took center stage, of course. Smith was able to switch emotions throughout the show seamlessly.

Rebecca Fitzgerald did an excellent job portraying “Rizzo,” one of the show’s main characters. She was gritty, witty, dramatic and enjoyable. Her timing was perfect.

Ryan Maxfield also delivered a stellar performance playing Kenickie, another troubled, but entertaining teenager. Maxfield had many opportunities to show off his talents, and he didn’t disappoint.

Perhaps Andrew Henson’s character, “Rodger,” stole the show. He had many moments to shine and used his comedic timing to entertain a willing audience. He managed to make his character lovable and hilarious, and was even willing to moon the audience during scene 6. That, my friends, takes guts. Getting pantsed and stuffed into a garbage can also got the audience clapping loudly.

Jake Rust had ample opportunity to show off his singing and performance skills during multiple scenes. He nailed it.
And we can’t forget Austin Miller’s moment in the spotlight as he played “Teen Angel” in one of the most hilarious, and spot on scenes during the show. Miller’s singing and acting were put on center stage and he delivered.
I would be remiss if I didn’t mention JT Tumanuvao’s character “Sonny” and the dancing, singing, facial expressions and timing that added tremendous value to CHS Theatre’s production.
There are too many characters to mention in this short space, so I must give credit to the entire cast for an excellent display of their creative talents. I include the backstage and lighting crew in my gratitude. They’ve spent much time preparing.
“Grease” debuted in 1971 and was directed by Guy Barille at the Kingston Mine Theater on Lincoln Avenue in Chicago, with a script based on Jim Jacobs’ experience at William Taft High School in the windy city. Warren Casey collaborated with Jacobs and together they wrote the music and lyrics.
Since that time, “Grease” has been performed many times on Broadway and has gone through several incarnations.
This CHS Theatre version continues Saturday at 7 and will have three more productions on March 14 and 15. 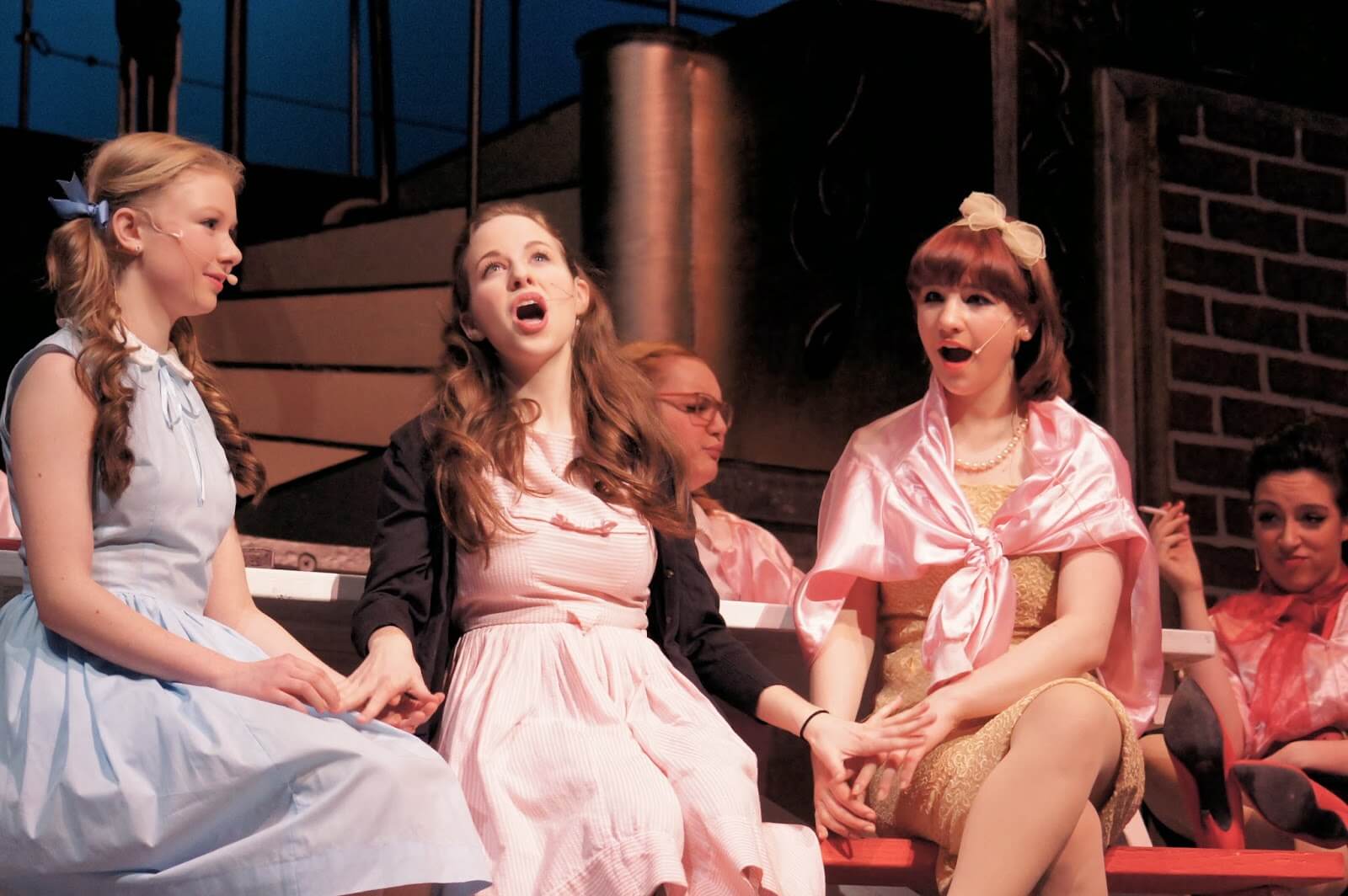