Camas High announced the move in a press release early tonight revealing that Jack Hathaway, a Camas assistant coach for the past seven years, will assume the interim head coach job for the 2021 fall season, said Rory Oster, the CHS athletic director.

Eagle has coached high school football in Washington for 29 years. Prior to Camas, he coached at Evergreen and Redmond. His career record is 229-70.

“It will be a loss we will feel deeply throughout our community here in Camas,” Oster said. “He is a future Washington State Coaches Association Hall of Famer, and a leader who meant so much to our kids, our school, and our entire community.”

Eagle will be an assistant coach for Portland State under head coach Bruce Barnum.

The Wolverines, trailing by 14 points half way through the fourth quarter, scored 24 points on the Papermakers, winning the incredible game with a 41-yard field goal with 1 second left on the clock. Final score: 38-35.

“We’ve known all season that we are we so motivated, and dedicated,” said Sleeper. “We do weight room in the morning, after games, we do conditioning all the time. We practice every single week as hard as we can. We practice every single play. We were down by two touchdowns late in the fourth quarter, but we knew we weren’t going to lose. We came back. We had a strong motivation on the sidelines. Everyone was cheering as loud as they could. Honestly, we couldn’t get ourselves down at all. We were confident, but we knew going into this it would be a close game.”

Jed Michael felt confident, but was also shocked he made the final field goal that sealed the deal.

It wasn’t the ending that Camas was expecting.

The Camas defense halted Bellevue on three consecutive drives with fourth-down stops, but Bellevue’s defense, though, forced a punt that was blocked, which set them up for their late rally, with under 5 minutes left.

Bellevue recovered an onside kick and scored on a 53-yard run by Drew Fowler to tie the game at 28.

A Camas pass was then deflected, which was caught by Bellevue, and within three plays, Alex Reid scored for Bellevue, leading 35-28.

Camas executed well deep into the fourth quarter, and when they got behind, they didn’t give up.

Andrew Boyle threw to Jackson Clemmer, who ran 63 yards to score at 2:17, tieing the game. The Papermaker defense forced a punt, but the Wolverines intercepted with 25 seconds on the clock — and they got close enough to score a field goal. 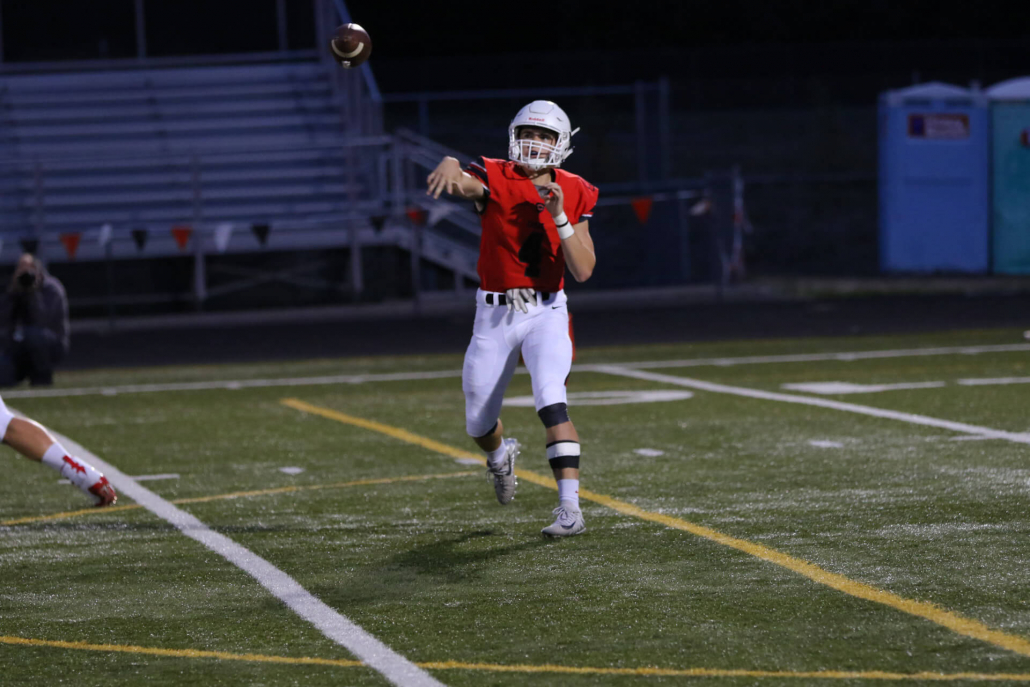 “We just knew Bellevue was going to bring a lot of guys that like to blitz,” said Boyle. “We knew we’d have to throw the ball, so we prepared well this week, and we did make a lot of great plays — the line protected me well. It was just a great team effort. We don’t give up, and it’s a great team to be a part of.”

“We came out knowing they had a good defense but the corners played soft,” said Sturbelle. “They were just good throws by Andrew really. He just dropped them in perfectly.”

Camas plays at Heritage next Friday. 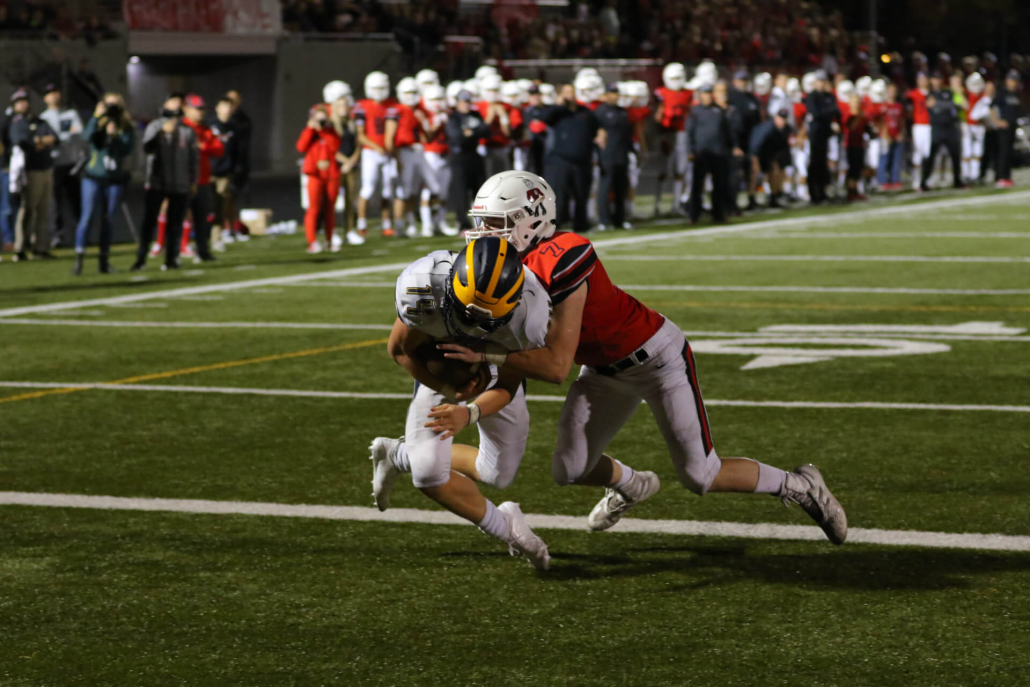 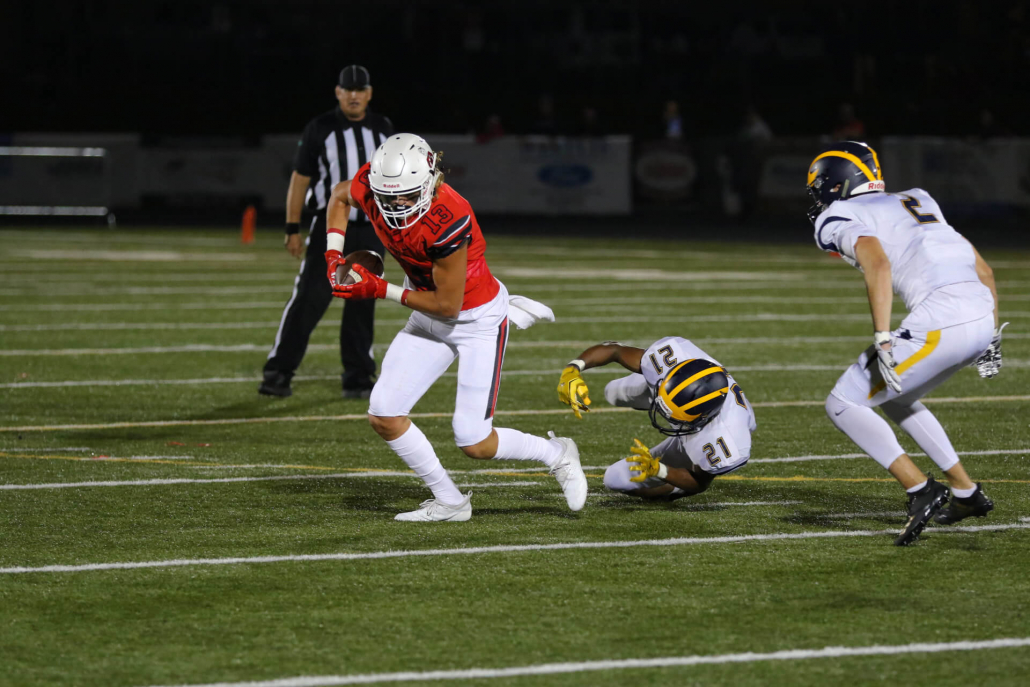 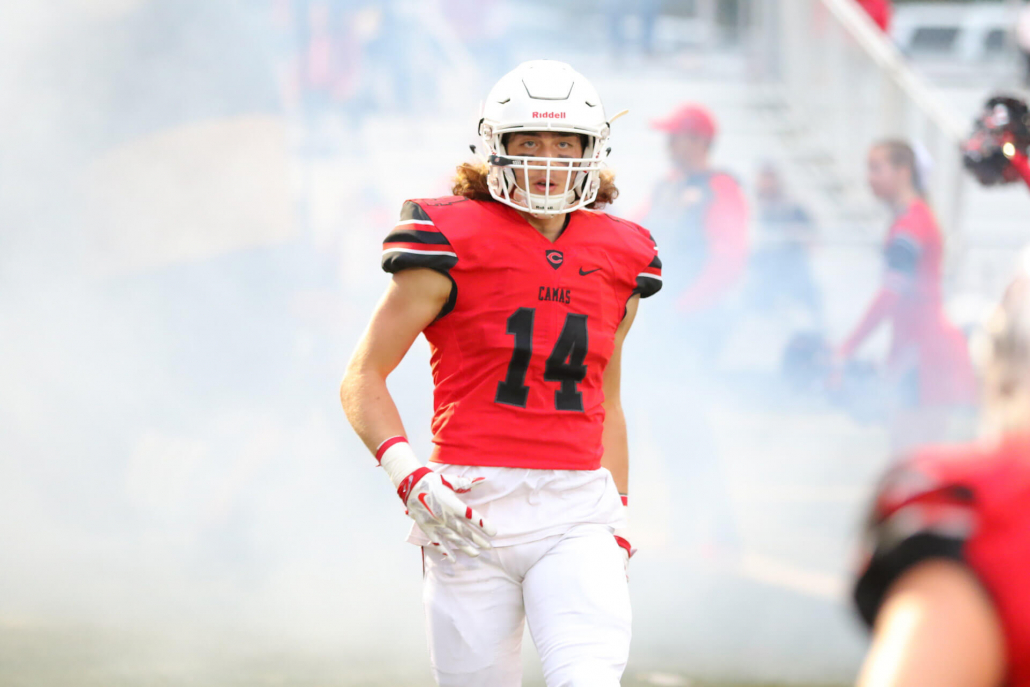 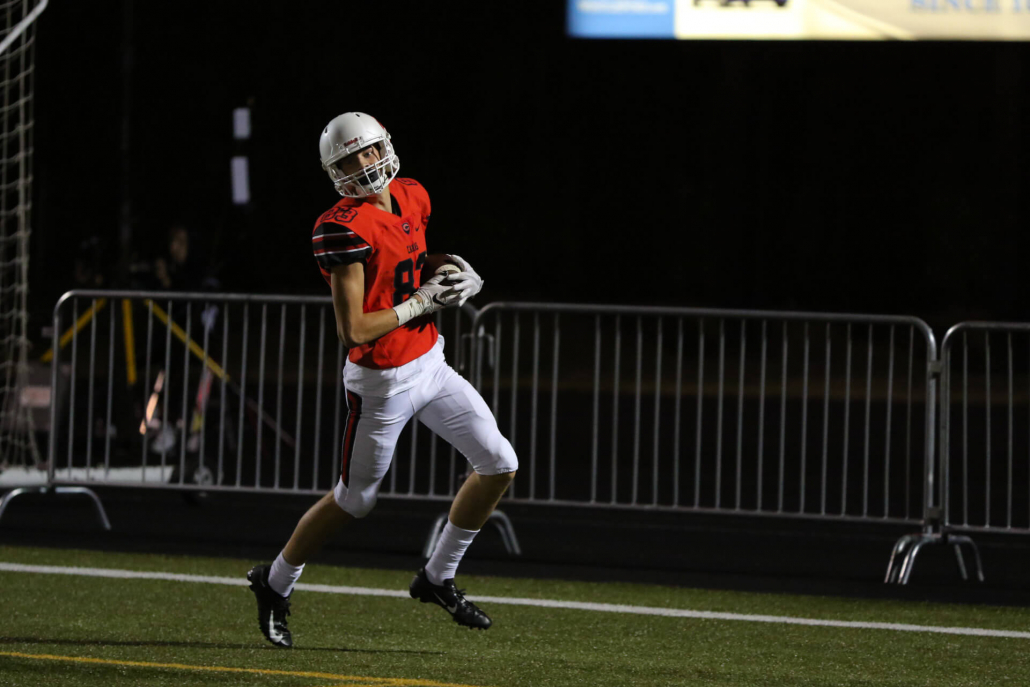 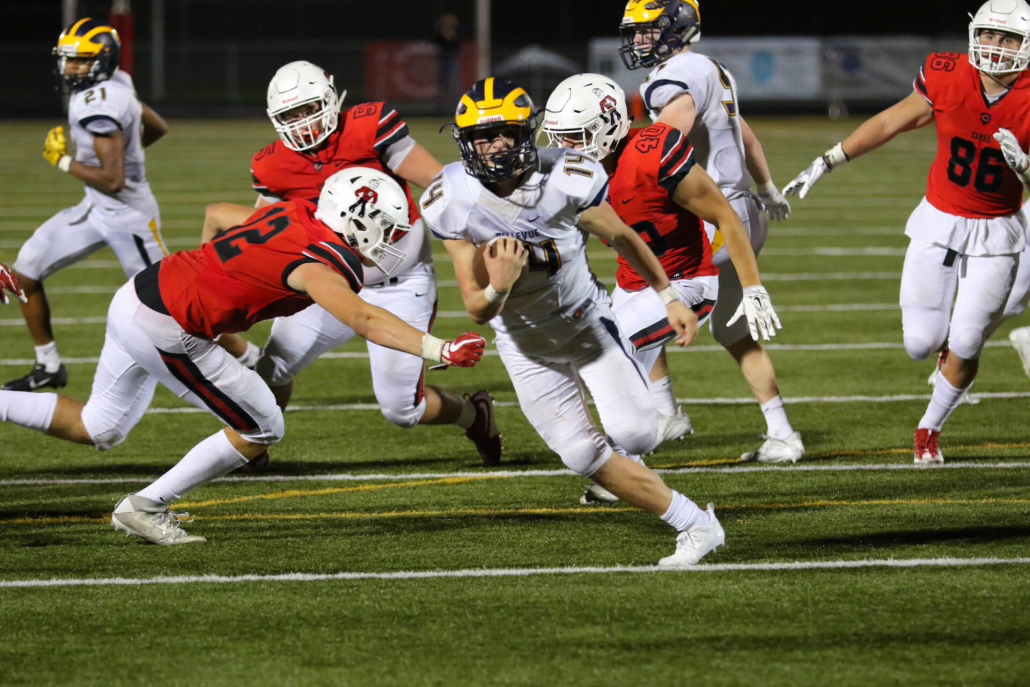 Camas, WA — The Camas Junior Varsity Football team won their last game of the season Thursday night, beating Union 27-12 on Titan’s turf. The team has continued to learn and grow throughout the season, said coach Jack Hathaway, who teaches Physical Education and Health at Camas High.

Many of the players do double duty, playing different positions for both Junior Varsity and the Varsity teams. #4 Andrew Boyle does double Papermaker duty — playing both Quarterback for the JV team (and sometimes Varsity) and kicks for the Varsity team. #33 Zach Terry is a running back for both teams.

At game’s end Coach Trevor Gentry told the boys: “It begins in the weight room, on and off season. Get stronger, focus, and some of you will play Varsity next season. You’ve worked hard all season, so continue to work, and it will pay off. Thank you for a great season, and for your commitment. We will miss seeing you every day.”

Some of the players will continue postseason play with the Varsity, however, most saw their season end last Friday as the regular season came to a close.

The Varsity team lost to Union 14-13, and will play in Auburn later this week.

DOC HARRIS STADIUM — The Camas Junior Varsity (JV) football team handily defeated Battle Ground Monday night, 62-28, and saw the debut of Freshman Quarterback Jake Blair, who entered the game during the second quarter. Blake Asciutto started for Camas and his first touchdown pass was to #33, Zach Terry, and then to #41, Jackson Preston.

“I had a really fun night tonight,” said Blair. “I threw for four touchdown passes and I love playing in front of my family and friends in a sport I love.”

Here are images, and one video with Blair, who discusses his JV debut.

Mystery and Mayhem and Book Group

This group meets on the second Tuesday of every month at 6:00 p.m. If you would like to join this book discussion group or have any questions, please contact any library staff member.

The City of Camas Planning Commission normally meets on the third Tuesday of each month at 7:00 p.m., in the Council Chambers at Camas City Hall, located at 616 NE Fourth Avenue. The public is welcome.

Meeting agendas, videos and minutes are located on the City’s website at: http://www.cityofcamas.us/yourgovernment/minuteagendavideo. The agenda is posted approximately five days prior to the scheduled meeting date.

The Planning Commission is the first legislative body to formally review land use issues. The Commission makes recommendations to the City Council as to best methods of conservation utilization, planning and development within the city. They conduct public hearings as part of their decision making process where they review planned developments applications.

There’s still lots of great, locally-owned produce to buy, plus try out some great food and treats from local vendors. Located in downtown Camas on 4th Avenue in front of the Camas Public Library. 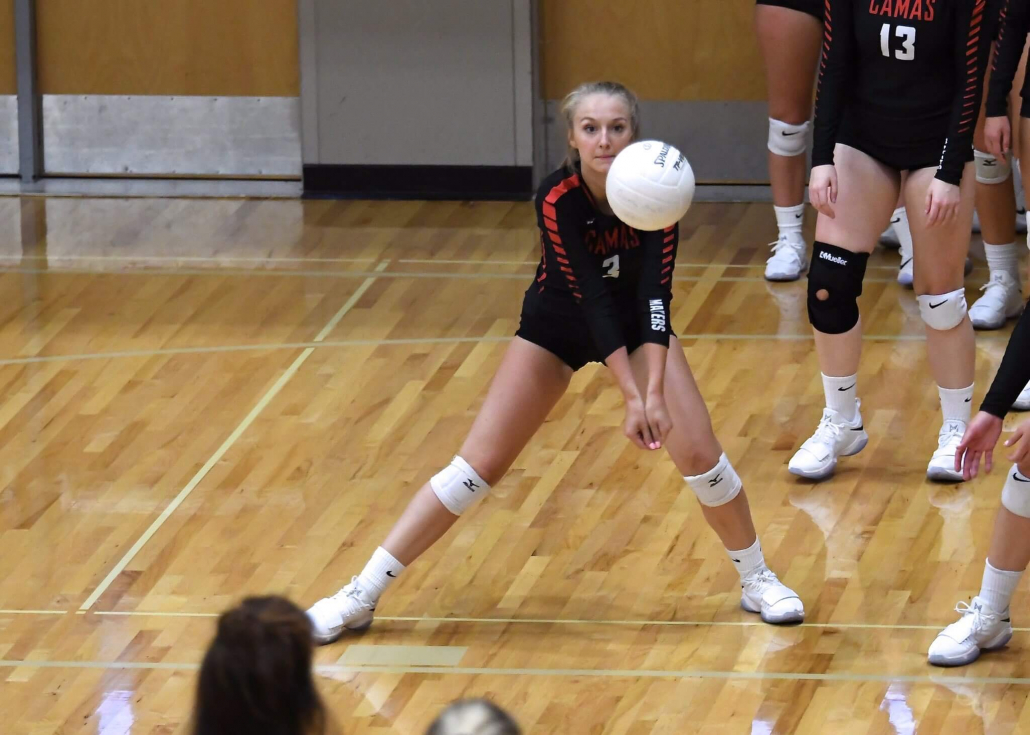 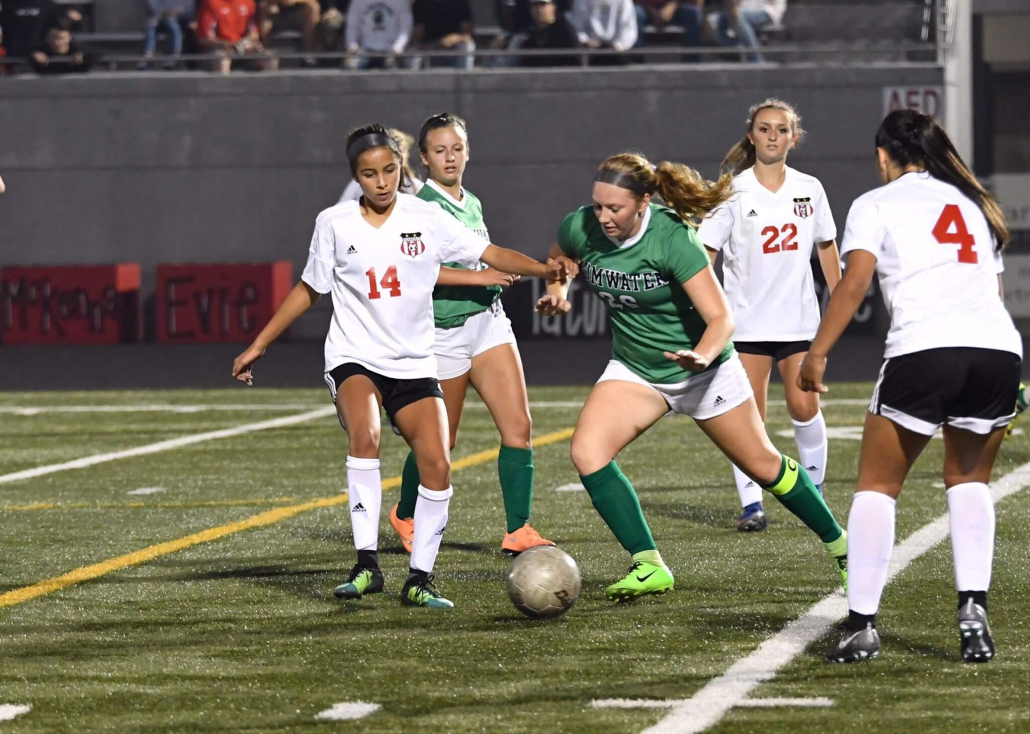 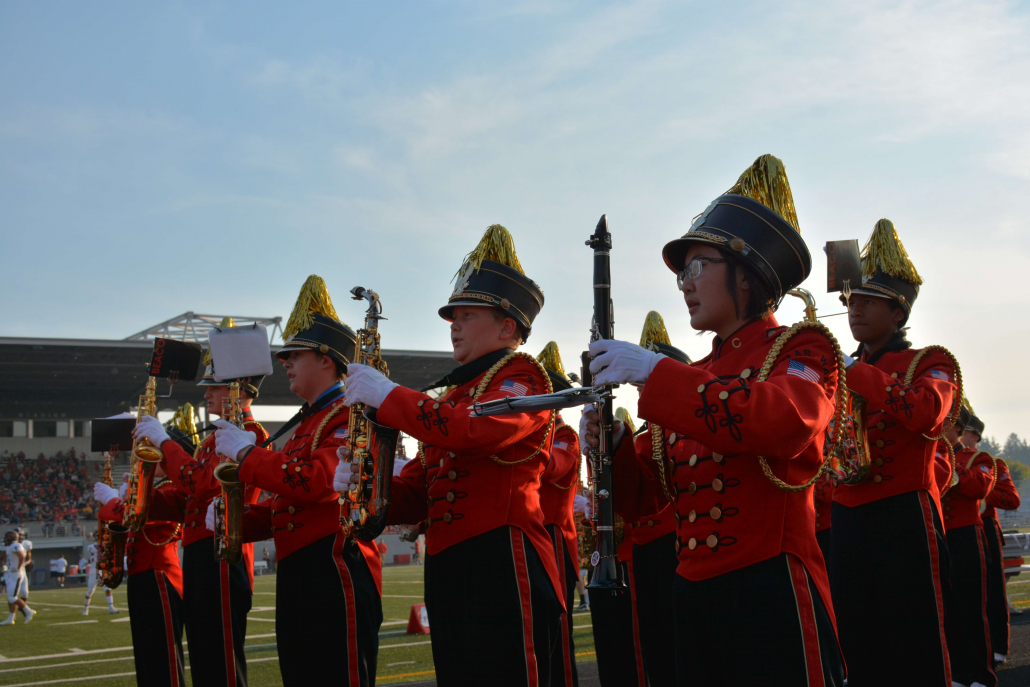 This is an excerpt from a September, 2014 interview with Camas Varsity Football Coach, Jon Eagle. 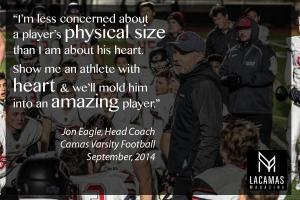 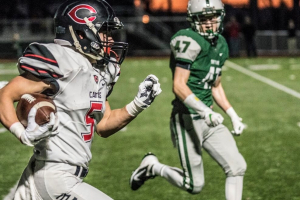 Camas — The Papermaker’s football offense spoke loud and clear Friday night in the first round of 4A playoffs at Doc Harris Stadium. And the defense screamed loudly too, in a 49-6 crushing of the Bethel Braves.

It was over by halftime. The fans loved it. 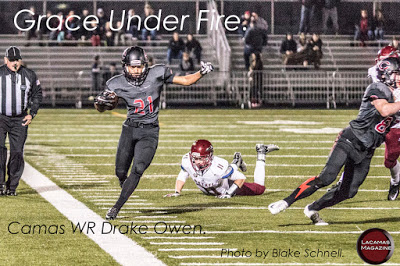 Wide Receiver Jordan Del Moral ran for four first-half touchdowns, and Camas scored touchdowns on their first five possessions. It was a fantastic game for QB, Liam Fitzgerald, who passed the ball to a variety of receivers throughout the night.

“We had a great night,” said Fitzgerald. “I hope we do well again next week. We’ve been putting in the time, and we have an amazing team here.”

Del Moral scored the first four Camas touchdowns on runs from inside the 10. He finished with 66 rushing yards and another 70 on three receptions.

In the first half, Fitzgerald completed 16 of 23 throws for 237 yards. Among them was a 43-yard catch and run by Drake Owen for the fifth Camas touchdown.

Coach Jon Eagle, like his players, enjoyed the sixth first-half touchdown, which was a 51-yard interception return by Blake Roy.

“I appreciate how hard the boys played tonight,” said Eagle. “We work them very hard, and it shows. It’s also a reflection of all the coaches, and the support of all these great fans here at Doc Harris Stadium.” In total, there were three interceptions, including another by Jared Bentley, who picked off a pass in the end zone. Jack Colletto intercepted the first pass of the second half.

The Braves only had a net 19 yards rushing, with 142 passing yards, with three completions of more than 30 yards.

The Papermakers return this Friday at Doc Harris Stadium.

CAMAS — The Camas Varsity football team made their statement early and loud Friday night against Evergreen on their home turf with a series of solid plays, beating the Plainsmen 49-7.

The Papermaker defense rocked against the Plainsmen speed, forcing five turnovers and limited Evergreen to 174 yards of offense.

It wasn’t a good night for Evergreen (2-2, 1-1 4A GSHL).
Camas coach Jon Eagle said: “I thought our defense was spectacular.”

The Papermakers (4-0, 1-0 4A GSHL) were prepared defensively and have been working hard at practice.

Offensively, Camas scored twice early in the game, and ran up the score to 43-0 at halftime.
Papermaker running back Brian Kelly ran 187 yards and had two touchdowns on 11 carries. Running back Cole Zarcone carried five times for 83 yards and scored a touchdown on a 53-yard run. It was impressive.
Camas quarterback Liam Fitzgerald threw for 187 yards and three touchdowns.

Emotions ran high when Senior receiver Dane Santos was seriously injured on a late hit midway through the second quarter. Santos caught a pass for 22 yards and a first down when he took the late hit on the sideline. At report time, kicking Coach Darren Alcorn said he thought Santos sustained a torn ACL.
Eagle thinks it could be a season-ending injury. “I’m sick about the whole thing,” he said.
During halftime, Camas High School introduced their Athletic Hall of Fame inductees for 2014. Every two years, Camas honors past athletes for their achievements on and off the field. The inductees will be honored later this Fall at a special banquet.