The stars came out in their favor.
After their win on Sunday, the Camas LL 10/11 All-Stars are now preparing for State competition, which begins on Saturday at Gig Harbor, WA. The boys swept the District 4 Tournament, held at Cascade Little League, winning six consecutive games. The final score on Sunday was 16-4.
The team is coached by Andy Ott, Joel Shega, and Ken Broadbent.
“We’re very pleased with how the boys played,” said Ott. “And, we’re excited they get a chance to play at the State level next week. We’re looking forward to it.”
To learn more about Camas Little League, visit www.camasll.com 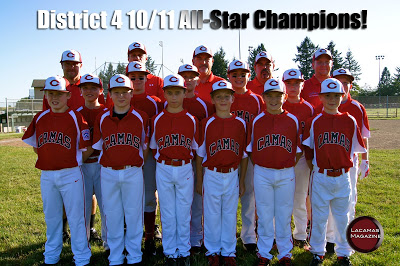