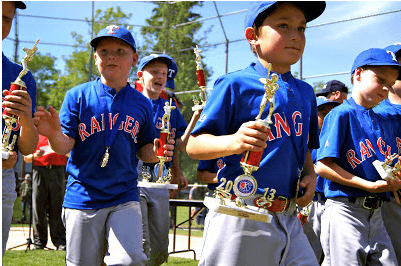 The Rangers continued their winning streak, beating the Mariners, 8-5, in a good game that saw some odd plays and fun times for the Little Leaguers.

The Rangers started with Kandai Shimada on the mound. Shimada, whose steadfast and focused pitching helped secure his team’s top placement weeks ago, struggled a bit and gave up a couple runs early on. The Mariners, for their part, hit well, and made some good defensive plays.

Miller was relieved by Tyler Renteria.

The Rangers’ Shimada was relieved by Kyle Hunt, who did a solid job. Offensively, the Rangers found their bats late in the game and secured their victory, winning 8-5.

The Rangers, coached by John Blair, Kris Jamison and Brad Pershing, struggled in the semi-finals on Thursday against the Cardinals and fell behind 13-8 in the fifth inning — only to rally 13 runs in a single inning.

The “littles” as Blair calls his youngest players (Zach Blair, Luke Jamison and Aaron Geigenmiller) carried that game as Jamison played behind the plate, and Blair and Geigenmiller pitched. Geigenmiller closed the game, and “I think he’s the only 8-year-old to have a win in a semi-final game,” said Coach Blair.

The Rangers won that game, 21-16, which brought them to Saturday’s finals. 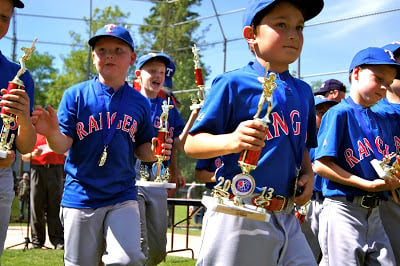 The Mariners, coached by Jerry Burnett, Curt Renteria and Jay McGuire, placed second in league and in the tournament.