Vancouver, WA — Local leaders held a Transportation Solutions Town Hall Saturday at WSU Vancouver, which was organized by Washington State Representative, Liz Pike, to present solutions to the growing Portland/Southwest Washington metro traffic problems. During the 2+ hour session, Pike, along with engineers and architects, presented multiple proposals and listened to the concerns, ideas and feedback from Southwest Washington residents.

Pike organized the event to encourage “common sense solutions” to a problem that keeps getting worse. KOIN 6 News reports that “traffic volumes are up 300 percent from a year ago” as 80,000 commuters drive in from SW Washington to Portland each business day. Congestion is heavy along both Columbia River bridges (I-5 and I-205), as well as on I-5 southbound, I-84, I-405 and Highway 26 throughout Portland Metro. 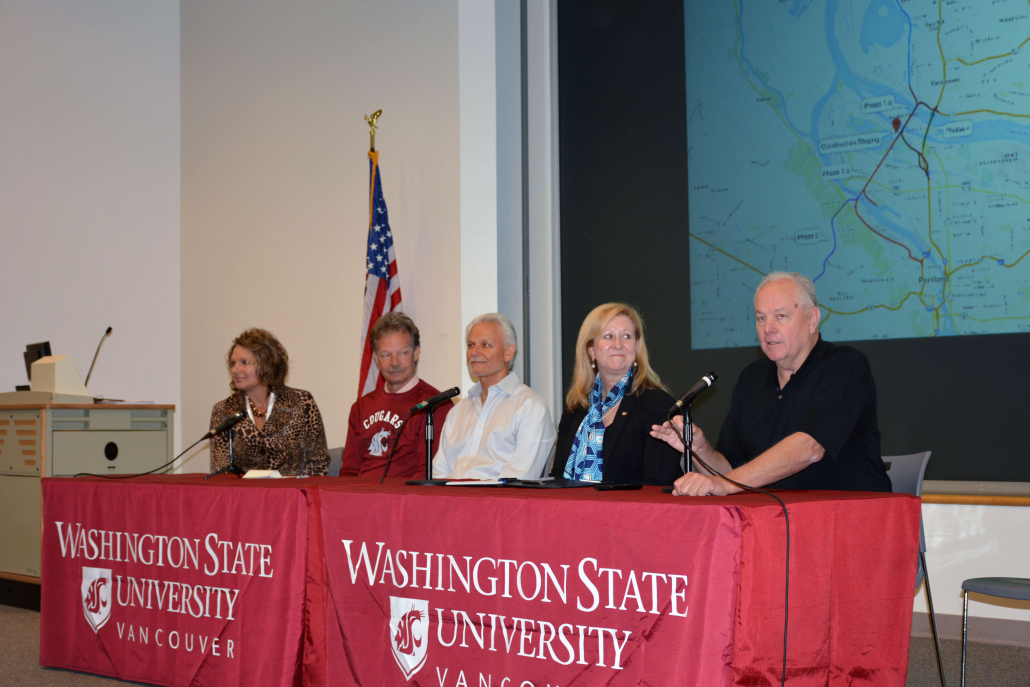 This transportation solutions panel does not support a replacement for the Interstate Bridge following a multi-year $200 million study that resulted in zero results.

“A new I-5 bridge would not get us to Portland any faster,” said Wagner. “The whole CRC process resulted in wasting tax dollars on a study. And Clark County continues to reject light rail coming from Portland.”

Wagner said the panel does approve making seismic upgrades to the Interstate Bridge, and insists that replacing the bridge would be a waste of public resources. 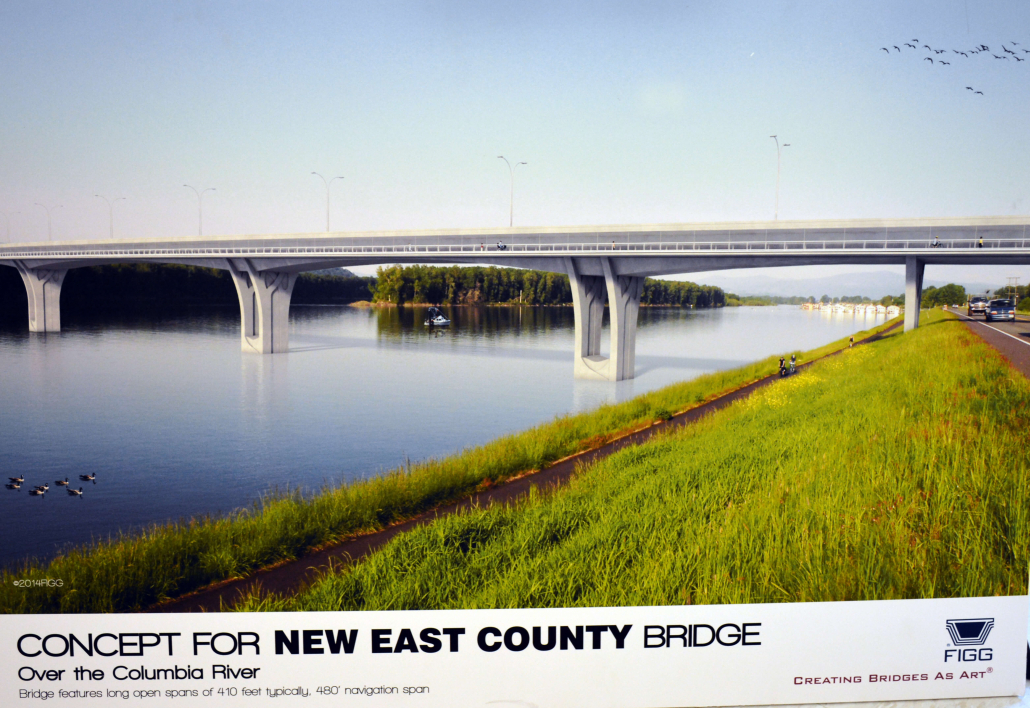 This is the concept for the new East County Bridge.

West Express is an eight-lane limited access corridor with three express lanes in each direction, flanked by dedicated high-speed merge and exit lanes and features an elevated 20-mile bicycle and pedestrian path.

The project would alleviate traffic pressure from I-5 and I-205 routes.

Practical Design Fly-over Near I-5 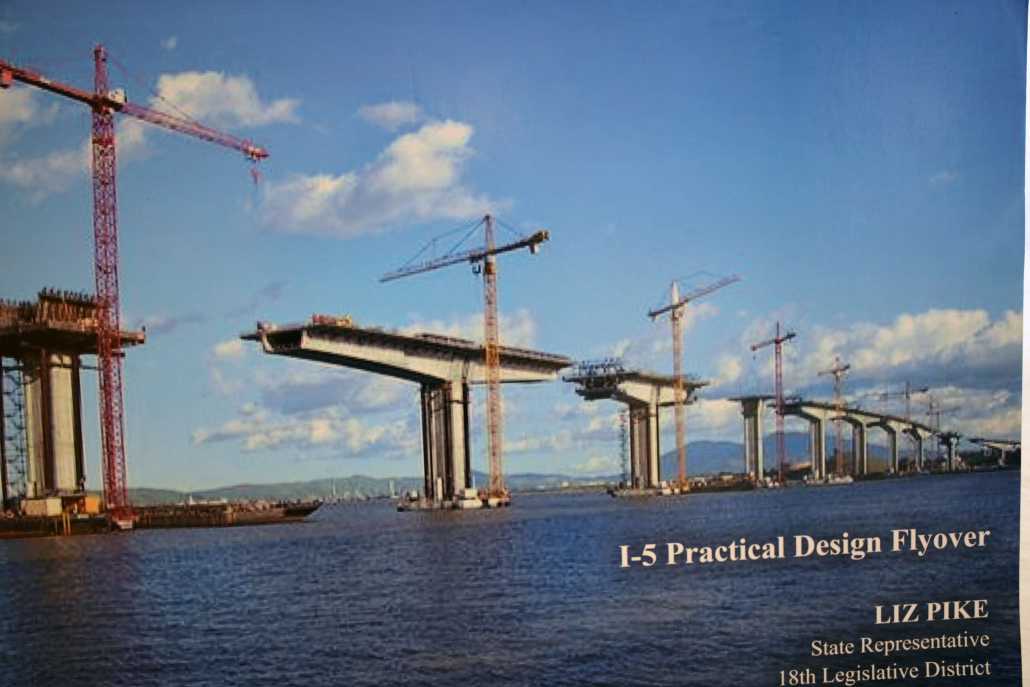 Concept for I-5 Practical Design Flyover.

New Tunnel Below I-5 Corridor

The is a $4.5 billion project that spans 7.8 miles — from Leverich Park to the I-5/I-405 couplet, which adds two lanes north and two lanes south, offering massive freight mobility improvement, as well as improved commute times. The project would be privately designed, financed, built, owned, operated and maintained. It’s estimated completion time would be four years.

This project would require $1.7 billion for a new multi-modal bridge, 1.2 mile tunnel and 11.3 miles of CHSR corridor with three auto interchanges. The multi-modal bridge is double decked west of the existing BNSF Freight Rail Bridge. The top deck has four lanes for vehicles, and the bottom deck has two tracks for freight trains, and two tracks for the Cascadia Commuter Express/CHSR.

The Cascadia Commuter Express corridor would run from the Rose Quarter Transportation Hub to a platform stop in West Vancouver and have a platform stop at 78th and Fruit Valley Road in Hazel Dell.

The 11.3 mile Cascade Commuter Express train would move 16,000 people per hour, and the trip time between Portland and Vancouver would take six minutes. This would be a private-public partnership.

During the public input segment, Robert Schalk, who worked for the Oregon Department of Transportation (ODOT) for nearly forty years, said “Most of what you drive in Portland I helped design.” Schalk’s opinions included the following:

Julie Russell, who is running for Washougal City Council, said “People are opposed to tolling, and we need to hear their voices, and how do we get elected officials to understand that cars and new lanes aren’t evil?”

Roan Friar said he was intrigued by the fly-over design, but has concerns about funding. “I am also opposed to tolling,” he said. Others also inquired about the feasibility and speed of projects that are privately financed.

Figg said going the private funding route would still require environmental impact assessments, which would take about seven months. Privatized projects would be funded by investors who would toll passage to recoup their investment.

Richard Grill expressed his concern about working with Oregon. “They need to hear our side.”

Pike encourages Clark County residents to “speak out for improvements to their infrastructure by rising up and making their voices heard.”

“Get in to see politicians, talk to them face to face, get to know people in Portland, and let them know what you think,” she added. “Rise up …”

Lacamas Magazine will continue to discuss this topic and follow up with future town halls and progress. Public feedback and ideas are encouraged.