Camas Theatre premiered “Sillyheart” Wednesday night in conjunction with Compass Oncology and the Leukemia & Lymphoma Society as a fundraiser to help cure cancer.

Before the touching play began, the audience heard from Brianna Barrett, who was named “Portland’s Best Storyteller” by Willamette Weekly. She discussed being a cancer survivor and how she documented her cancer battle. Dr. Kathryn Kolibaba, who practices hematology/medical oncology at Compass Oncology in Vancouver, WA, talked about how everyday heroes find ways to raise and apply needed cancer research funds. Megan McDonald talked about her daughter’s ongoing fight with leukemia, and Janelle Hayden also shared her family’s story of how they battle the disease.

From the playbook: “The fairy tale world winds itself around the real drama of one little girl’s battle with cancer and her family’s anguish. As they struggle to cope with her prognosis and desperate treatment, the fairy tale characters from the little girl’s book play out in their own drama. Will an evil sorceress and her dark creatures succeed in pulling Princess Caroline (played nicely by Genesis Martinez — on this first night) away from her beloved family and prince? Will little Cora’s experimental cancer treatment save her?” 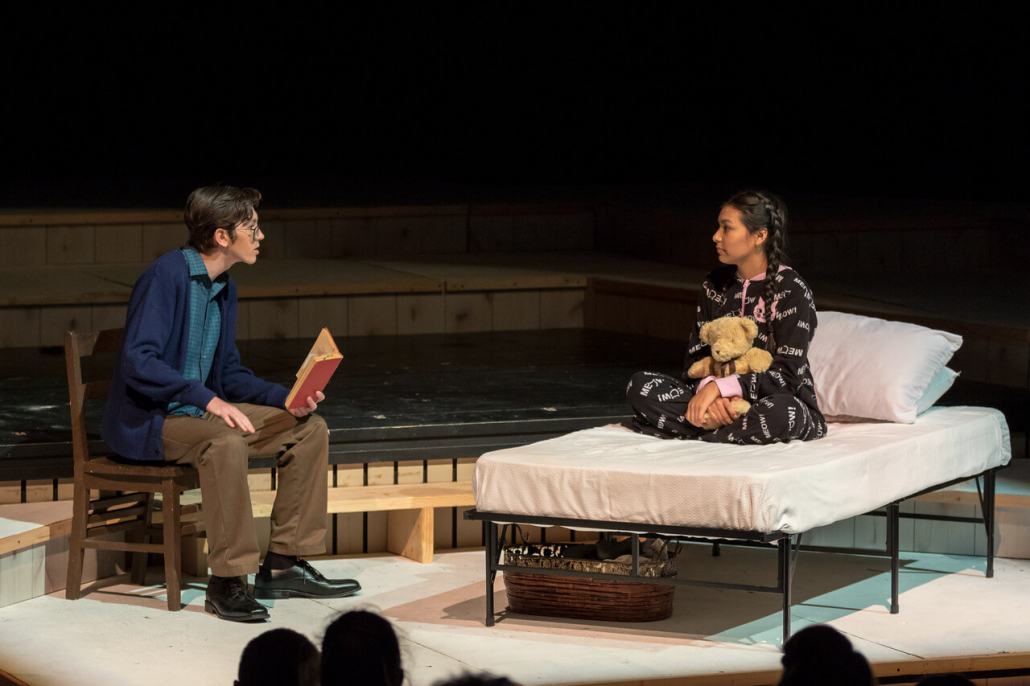 Actors Wyatt Hodgson and Genesis Martinez in the opening scene of “Sillyheart.”

“In our imaginations, the villain is always slain, the good win out, and even happily ever after is truly possible. Our fantasies, like so many blankets, can keep us warm in time when the real world is simply too dark, cold and cruel to bear. At the end we are reminded it’s not just children who need fairy tales.”

The play is written by Billie W. Boone, and directed by Sean Kelly. The stage manager is Lily Haddan; costumes and makeup and by Carol Babilon. The event is coordinated by Kylee Shafiuzzaman.

Songs for Autumn, A Spotify Playlist by Veronica Beth Whitney