Portland, OR — The Camas Boys Wrestling team made significant improvements at this year’s Rose City Wrestling Tournament at Westview High School. Four boys made it to Finals, with two winning their weight classes — Rylan Thompson, and Tanner Craig. Samuel Malychewski and Isaac Duncan placed second in their weight classes.

“Rose City is a major tournament,” said Head Wrestling Coach, Cory Vom Baur. “We had a record finish of fourth place, and last year we took eleventh, so that’s a major improvement.  We had four finalists this year, and last year we had one, and the year before that we had one. Three years ago, no one reached the finals.”

Thompson (5-0) won by decision over Sawyer Myers, of West Albany, and Tanner Craig beat a returning state finalist (Gavin Stockwell) that beat him three times last year in the semi-finals.

“The team did really outstanding the past two days and learned a lot from wins and losses,” said Thompson, a Senior who’s been wrestling since third grade. “They battled great, it was a tough tournament, and they all wrestled well.”

The tournament brings in over 50 schools from across four states.

Thompson said the boys put in the time at school practice, club practice, weight lifting and closely monitoring their diets.

“I like when all the work I put in pays off,” Thompson said. “I also like the extreme highs and lows of the sport.”

He said wrestling’s biggest challenge is learning how to keep your mind set right. 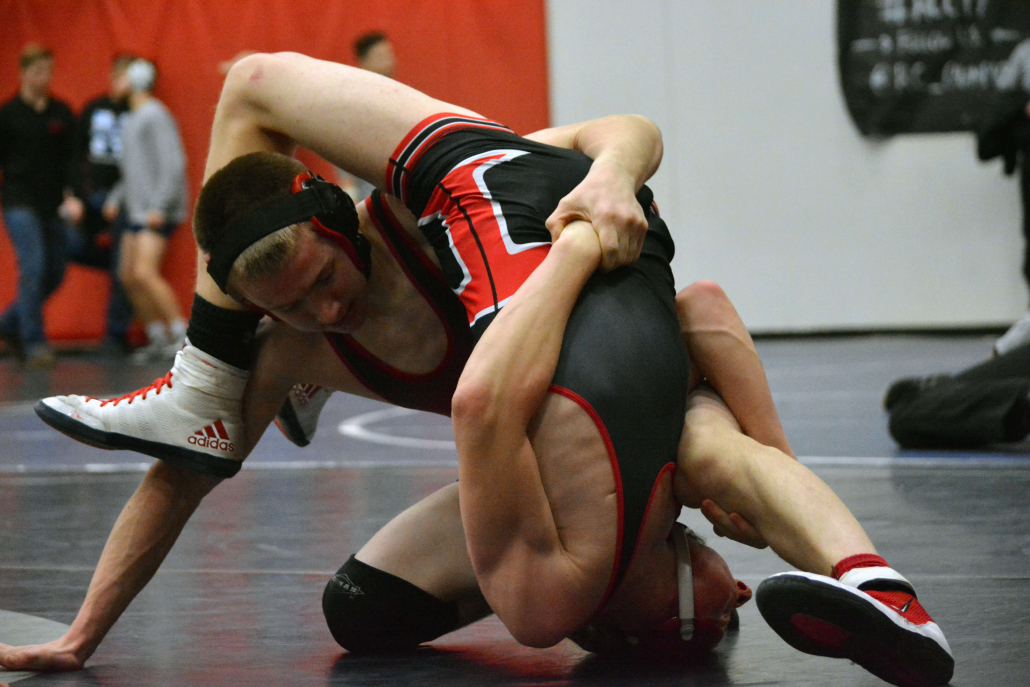 Tanner Craig during day 1 of the Rose City Wrestling Tournament.

“I feel really good about the win,” said Craig, a Junior, who is undefeated this season. “I feel great about the win. I beat some kids I wasn’t supposed to beat who had beaten me in the past, and it felt really good to come out on top today. I feel there was some well earned wins, but some close losses that our guys should have won. I have confidence  in our team’s heart and I know that next time it’s close that Camas will be on top.”

The boys practice several hours a day, and their next wrestling match is this Wednesday at Skyview. Next weekend, they travel to Coeur d’Alene for another major tournament.

“I felt that we showed up big as a team by placing fourth as a team and showed that our team is one that is going to do well this season,” said Samuel Malychewski, a Senior.

And, the team keeps plugging away.

“Overall, I thought we did really well,” said Vom Baur. “The guys responded well, and they wrestled a really great tournament.”

Get Into The Holidays With “Before We Turn To Stone” Performanc...
Scroll to top
Posting....