Editor’s Note: This is the first of a series of articles about the history of the Camas Mill.

Camas, WA — The Camas Mill has undergone many name changes, renovations, additions, and has a history filled with fascinating stories dating back to the 1880s.

Longtime mill employees Anna Fry and Caroline Mercury (who recently retired after 36 years) spent considerable time gathering the history (artifacts, logs, books, photos, tools, etc.) and have created a Mill Interpretive Center, or museum, that gives visitors a comprehensive look at what turned Camas into a town, and why we’re called the Papermakers.

The Interpretive Center is open on First Fridays, near the mill’s main entrance on Adams Street (with the black canopy) and provides visitors with an excellent 10-minute movie that provides a light overview of the mill’s history, the people who built it — and those who continue to work there today.

Even if you’re not a history buff, spending 30 minutes at the center will open your eyes to its history — and it may even surprise you.

One of the first things Mercury presented was the mill handle pattern, which is made of wood. It served as a pattern for the 20,000+ steel handles manufactured throughout the mill over the generations.

“It was handcrafted with great precision,” said Mercury. “And we’ve preserved it here for history.” 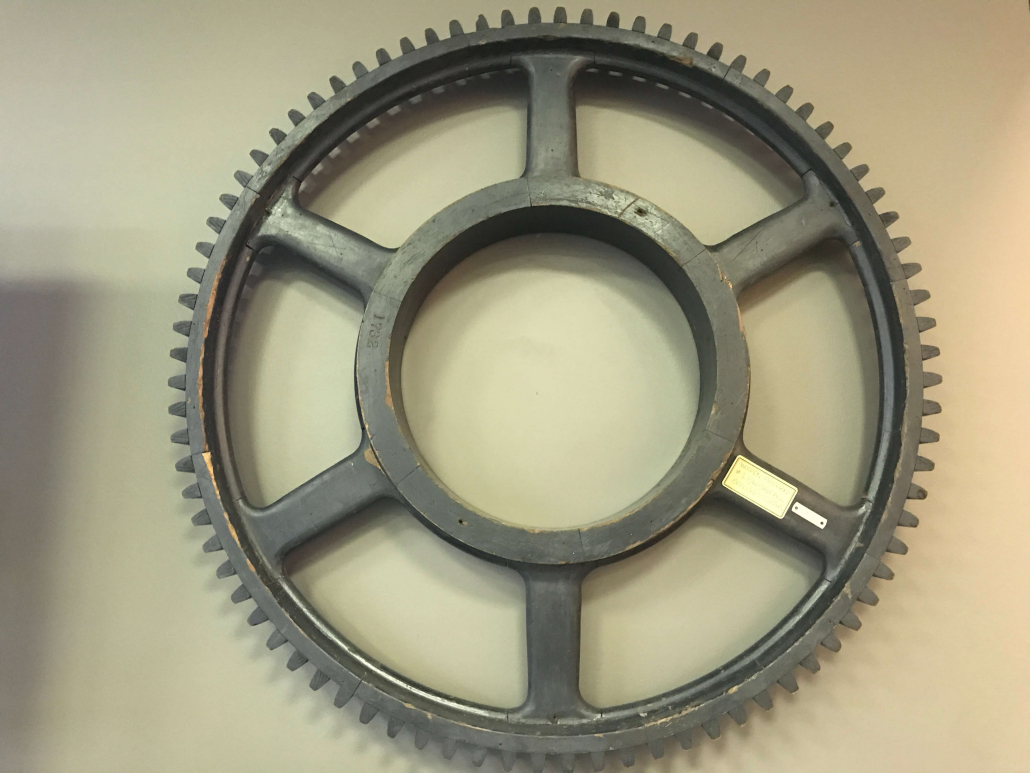 This wooden gear served as the pattern for more than 20,000 steel handles that operated at the Camas Mill.

They happily showed off manager book reports dating back to the 1920s, detailing every expenditure, including the cost of meals. They pulled out dozens of photos dating back to the first mill, which burned down. We looked at photos of the brand-new manager’s house, which was built in 1923 and still stands today on 6th Avenue and Garfield. They shared stories like when the mill was converted into a machine shop to make ship parts during World War II.

”We built rudders and great cleats,” said Fry. “Those (the cleats) are the things that hold the ship at the dock.”

During the Depression, said Mercury, they never laid anyone off, and kept people working part-time.

”The mill made sure that families had milk and bread during those lean years,” said Mercury.

And, did you know that currently the mill produces 50,000 tons of paper a year? 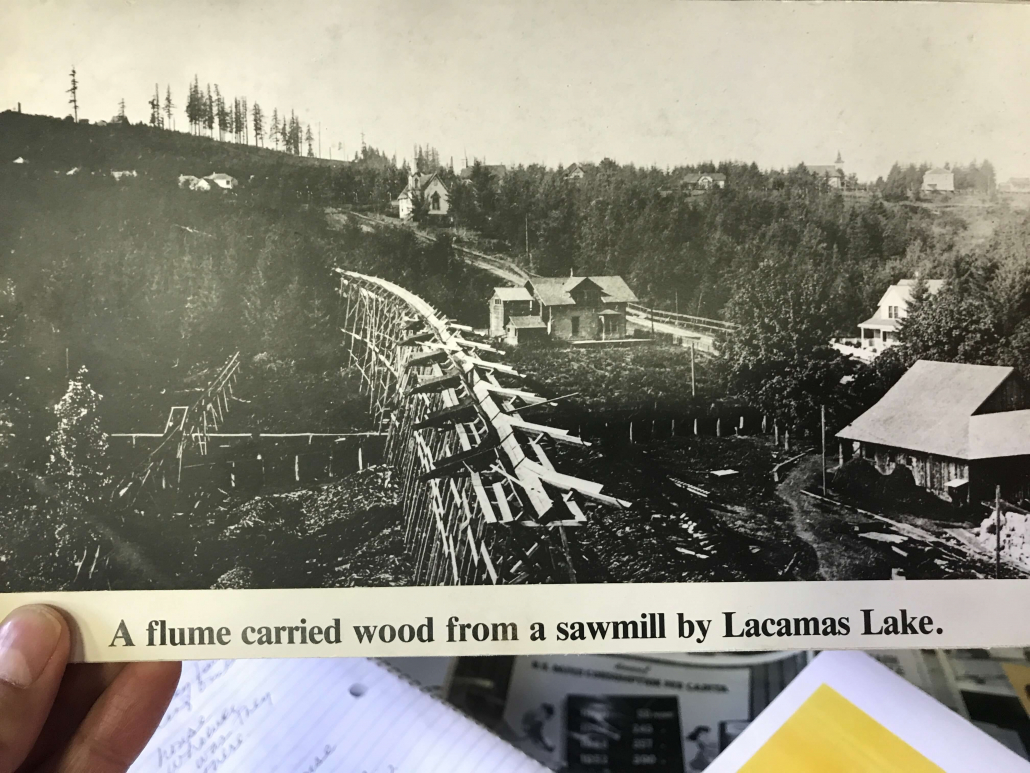 This flume carried wood from a sawmill by Lacamas Lake.

The mill’s history dates back to 1883 when Henry Pittock, who owned The Oregonian newspaper, formed a company called the Lacamas Colony Company. Under Pittock’s leadership, the business purchased 2,600 acres of land and began construction of a paper mill that would supply newsprint for The Oregonian. The purchased land included property north of Lacamas Lake.

Crews began clearing land, building dams, and constructing a saw mill. Thirty Chinese laborers began work on the mill ditch, which is an aqueduct that continues to supply the Camas Mill with water today.  During that same year, the town site of Lacamas was laid out and platted, and the town’s first store was opened for business.

The next article will look at growth in the 20s, 30s, 40s and 50s, and the numerous changes that ensued. 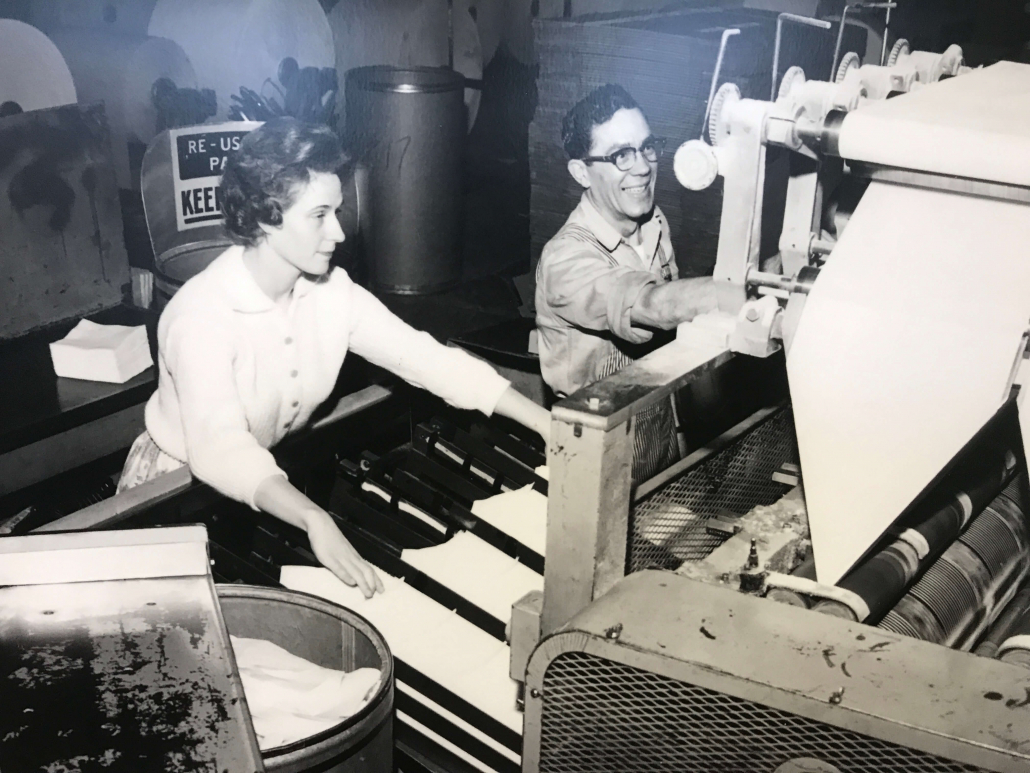 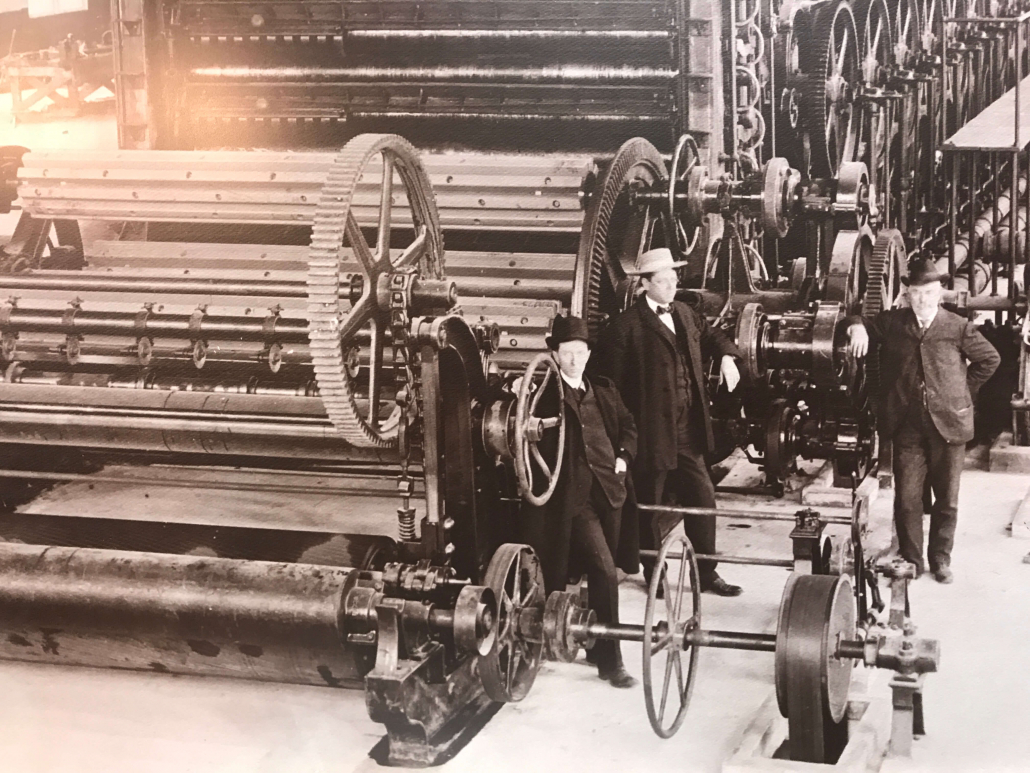 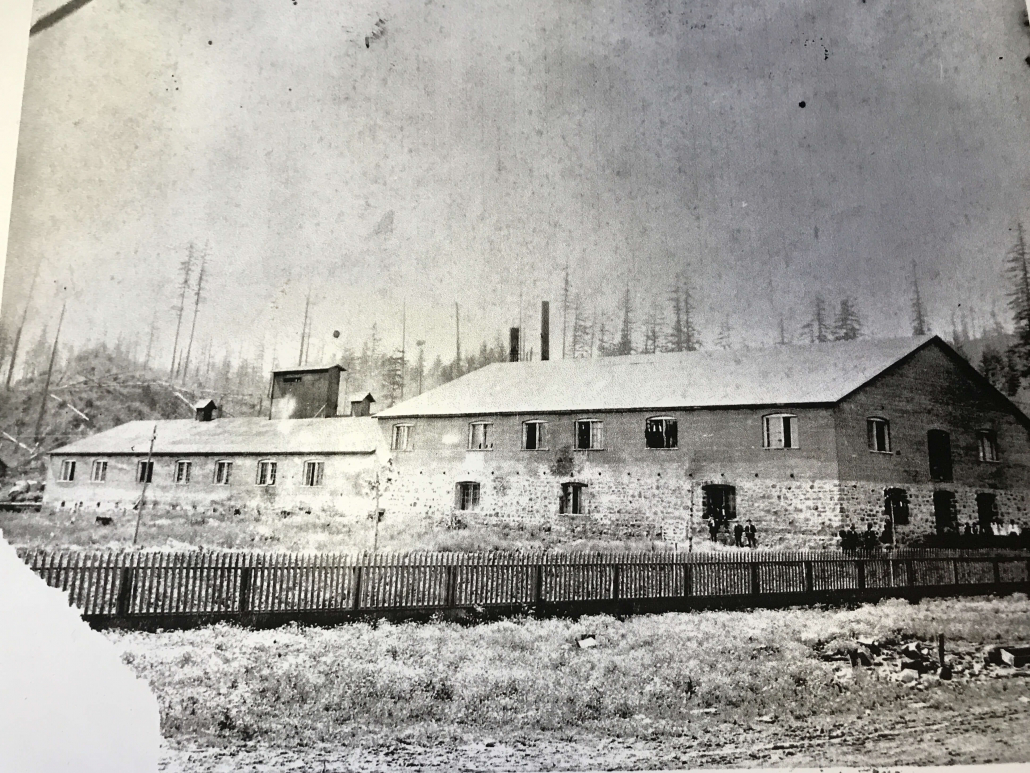 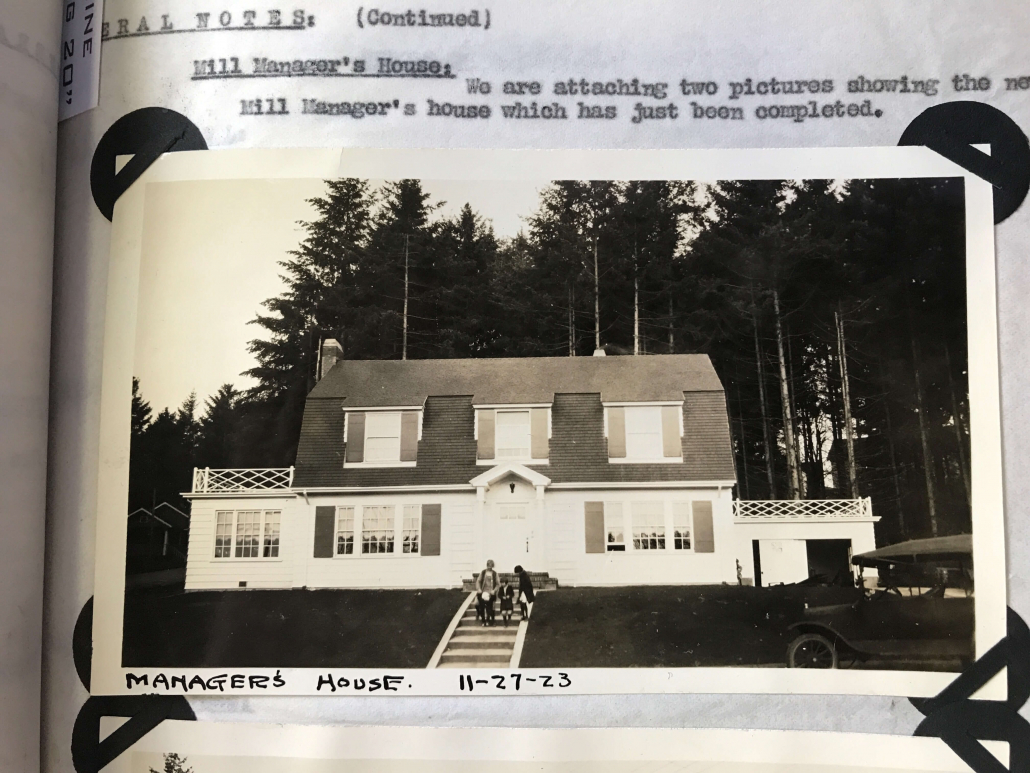 The Mill Manager’s house, right after it was built in 1923. The house came with the job. 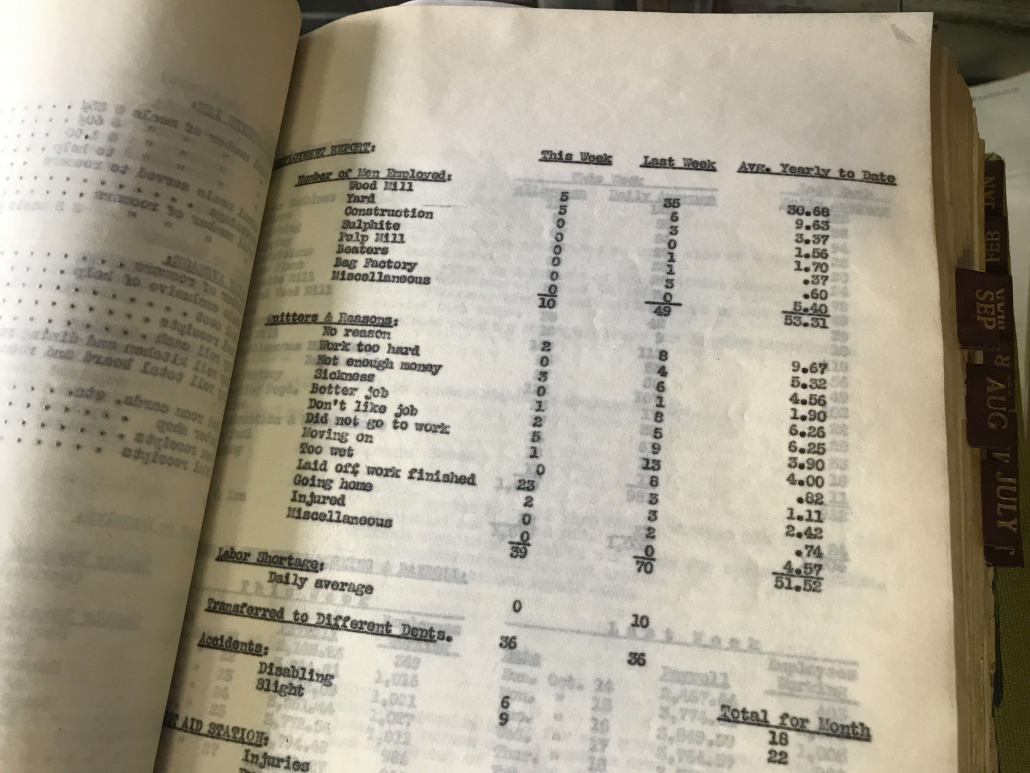