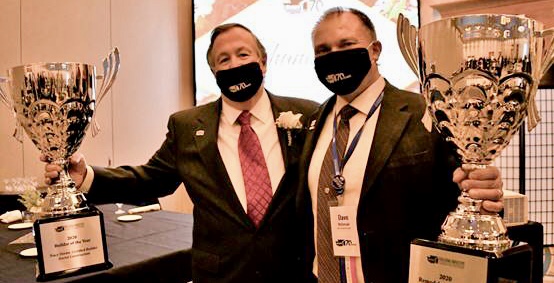 OLYMPIA, WA — The Building Industry Association of Washington (BIAW) honored its Builder, Associate and Remodeler of the Year members at its Fall Board of Directors meeting on November 12. Fellow BIAW members selected the award recipients based on their significant contributions to BIAW and the home building industry as a whole. The following two Clark County companies were chosen for Builder of the Year and Remodeler of the Year out of almost 8,200 BIAW members all over the state of Washington.

Tracy Doriot | Builder of the Year

Tracy Doriot of Doriot Construction is an award-winning custom home builder with 43 years in the construction business. ACertified Builder, Doriot has served on the Building Industry Association of Clark County (BIACC)’s board of directors since 2007, holding multiple committee chair positions and serving as president the second half of 2009, 2010 and 2016.  He’s an active recruiter of new members with 521 Spike credits to date.

Doriot has served on the Cascadia Technical Academy (formerly known as Clark County Skills Center) Construction Technology Advisory Committee since 1996 and has been chair of the board since 2019. He also serves on the board of directors for the Clark County Parks Foundation.

A state leader in the BIAW active in government affairs, Tracy participates in BIAW’s Washington Affordable Housing Council and has served as a senior officer on its Executive Committee since 2019. He was installed as BIAW’s 2021 President at the Fall Board meeting and will lead the organization starting in January.

Dave Myllymaki | Remodeler of the Year

Dave Myllymaki of ReNew Creations, LLC, has served as a BIACC director for five years and is currently BIACC president for 2020 and 2021.

Along with serving as local association president, Myllymaki served as the chair to the BIACC remodeling council for two years. His involvement goes beyond his local association, resulting in Myllymaki receiving National Remodeler of the Month honors from the National Association of Home Builders in 2018.

Myllymaki is also active in his church and works on a variety of community outreach projects. He has also been involved in projects for Camp Hope, Evergreen Habitat for Humanity and the Clark County Fair’s Junior Livestock Auction.