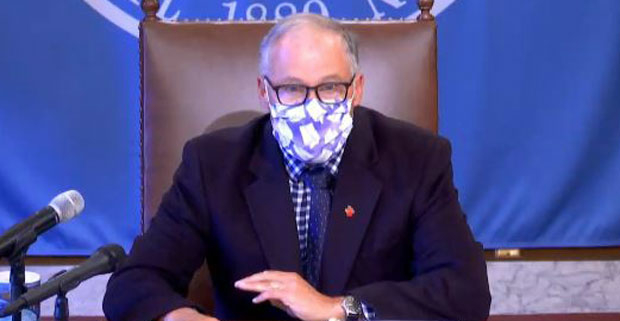 Olympia, WA — Governor Jay Inslee is expected to announce a series of restrictions Sunday to slow the spread of COVID-19 cases, including a ban on indoor service at restaurants and bars, as well as indoor social gatherings. In addition, the four-week mandates are to come with new restrictions on occupancy limits for retailers, according to the Washington Food Industry Association.

“The governor’s office is looking at some possible restrictions so we can get the COVID cases down again,” said Tammie Hetrick, President & CEO of Washington Food Industry Association.

According to Hetrick, the governor’s staff provided the association with early outlines of the mandates, but they have not unveiled all the specifics. Inslee is set to announce his plans in a Sunday morning at 11, as of this writing.

Inslee spokesperson Tara Lee said the four-week order will be effective this Monday, and has heavy restrictions on grocers, retailers and restaurants, as well as indoor social gatherings.

“We are not disputing the details and will provide more information on Sunday,” she wrote.

There is also a plan to update guidance on mask restrictions. It’s unclear what restrictions will be placed on gyms.

According to Clark County Public Health, two percent of COVID-19 cases are traced back to restaurants and grocery stores.

“One of the problems with COVID response is that our strategy has been one size fits all,” said Rivers. “We must shift to local control and local decision making for a tailored response. We can see from the information provided by Clark County public Health that restaurants are not where people are contracting COVID. On the contrary, the protective measures that have been taken are very effective. To shut down that significant sector of our economy when it is not contributing to the problem will only make things worse for us.”

Lacamas Magazine will air the Governor’s speech LIVE on Sunday at 11 am.