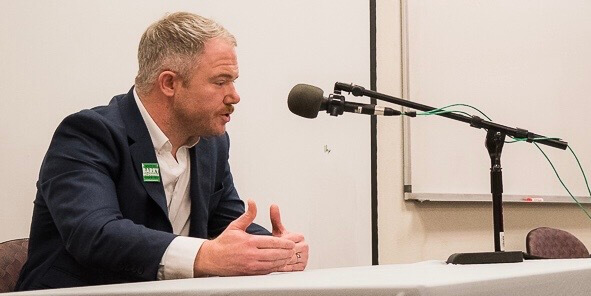 “While we’re surprised and saddened to see Mayor McDonnell step down from the role, we understand this is a personal decision between him and his family,” said Bryan Rachal, City of Camas Communications Director. “We appreciate the leadership Mayor McDonnell has provided the City and wish him the best in his future endeavors.  In terms of next steps, the City does have a process to fill vacancies of this nature and we will provide additional information related to this in the coming days.  In the meantime, Mayor Pro Tem Ellen Burton will assume the duties of Mayor of the City of Camas.”

This is the email the former mayor sent out this afternoon:

Over the last few months, it has become clear to me that the needs of this Council, City and community are such that balancing a full-time job and family, while running the day-to-day operations as Mayor in our form of government is not sustainable for me.

This job has taken up so much of my physical and emotional presence with my rapidly growing children, and I find myself missing out on more of their young lives than I am comfortable with.

After discussing with my wife and family, it is with a heavy heart that, effective today, I am resigning as your Mayor. This is solely a personal decision and I have full confidence in the City’s leadership team. I am leaving you in the capable hands of Mayor Pro Tem Ellen Burton.

It has been a privilege to work with the City’s staff – they are the secret of Camas’ success.

I want to thank our department heads for the faith they placed in me, their loyalty and most importantly, their friendship.

I want to thank Jamal Fox for being my right-hand man the last 9 months. It has been a pleasure getting to know him and I have a great appreciation for the amount of work he has done in tightening up our operations.

I also want to thank the citizens of Camas for giving me the opportunity to take the lead in our community. My greatest hope is that this run has inspired some of you to stand up and make a difference for what you believe in too.

In October 2019, I rolled the dice as a write in Mayor and took winning as an extraordinary honor. It was a historical opportunity and a huge challenge, and I am proud of what we accomplished together and that I was able to help lead this City through 2020.

I evolved my personal mantra of “love, peace and harmony” to a platform of Land, People, and Honesty and infused it into our bi-annual budget and how we approached our work.

I have been able to serve 50 percent longer than the previous mayor’s turn, but 50 percent less than Oliver T. Clark, Camas’ forgotten mayor.

I have done my best and followed where the universe led. I am proud of my time in office, and I thank you for the chance to serve.

Mayor Pro Tem Burton is in meetings and she will provide an update at a later time.

McDonnell’s short political career began in 2019 as a write-in on the wave of the anti-Prop. 2 pool campaign. He told Lacamas Magazine he didn’t think he’d win, but rather wanted to make a statement. He took office in late November 2019 and he oversaw the struggles of the pandemic and the impacts it had on the city.