When the author of “Shackleton’s Folly” started writing this intriguing book, he wanted to write Sci-Fi in the classical sense, to be filled with foreshadowing and enticing plots.

“It’s an adventure story about redemption,” says the author, Todd Yunker, who spent the better part of a year writing the book, which is part of a lengthy Sci-Fi series.

In this Sci-Fi story, Earth has been destroyed, few humans remain, and Shackleton, the novel’s central character, is determined to redeem his murdered father’s reputation by honoring his mission, namely to save the human race.

Integral to the story, Shackleton finds himself in a desperate race to solve an ancient legend of a lost tribe that long ago ventured into the stars. He seeks to find that tribe.

“Finding that tribe is key to solving his father’s dream and saving the human race from extinction,” says Yunker, who’s pleased with the effort. “I love how it turned out, and I’m already 115,000 words into the next novel in the series, which is called ‘Shackleton’s Critical Point.'”

Sci-Fi: A love for adventure

“I’m old school,” he adds. “I like the classics. I like well-written stories and well-written plots. And, I always enjoy storytelling and entertaining others.”

He says it’s also been a good way to engage his son, Alex, who’s been battling cancer for the past few years. “The book has helped him cope with the cancer, as he’s been my beta reader.”

The reviews at Amazon are good, as well.

Says reader, E.A. Gray: “From the earliest part of the book, I realized the quality of the writing, the writer’s understanding of foreshadowing, and the progressive movement of the plot and characters. Alec is a superb protagonist that is a multidimensional individual. His love for his father’s work is respectable and his grit really rounds out his character. This guy is a real brick-laying tough guy that also happens to have a big heart, as well. His sidekick Dancer is a one-of-a-kind construct who’s easy to acclimate to. Before you know it, you are fully suspending disbelief and developing a strong bond with these characters: A testament to the author’s skill at character development.” Another reader,  David Bowen says: “Shackleton’s Folly” hit all the right buttons for me. I feel a wistful sense of loss that almost no one is writing classic-style SF adventure stories, ones that echo with the touch of the ghosts of Heinlein, Clarke, Asimov and the other luminaries of the Golden Age of Science Fiction. “Folly” has a similar feel to the classics without being derivative. The driving plot is paced more like an Indiana Jones adventure, but the big ideas are there. When I say big…I mean big. The concept behind the Lost Wonder in this book is staggering, any other word is an understatement. I truly appreciated the author had obviously spent the money on professional copy editing. It nearly doubled the pleasure of reading the story. I’ve read nearly 500 books since I got my first Kindle, many by new authors, some of which are now in development as movies.” 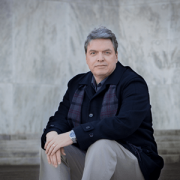 A little more about Yunker: He grew up in Salem, OR, and grew up with a passion for the science fiction genre. As a child, he was an avid reader, and relished the old sci-fi movies.