Lacamas Magazine subscriber, Katie Shepard, was up late last night preparing a leprechaun basket for her young children, in honor of St. Patrick’s Day. Her kids love surprises that make these kinds of days even more special.

“I do it every year,” says Shepard. “Reina couldn’t sleep last night because she was so excited. She was excited to show me the treasures that they brought her. Every year they bring something different from gold dollars, to movies, to toys. But they always get a shirt to wear. Jay (her youngest) still doesn’t get it yet.”

Shepard’s mother-in-law is Irish, “so that is why I do it.”

At the Sanville home, the leprechauns come every year.

“Sometimes they are naughty and leave a mess and turn the milk and toilet water green,” says Rebecca Sanville, mother of four. “Other times they bring gold coins or green treats for all the kids! We set a trap each year, but have yet to get a little, feisty green man!! Thank Goodness!!” 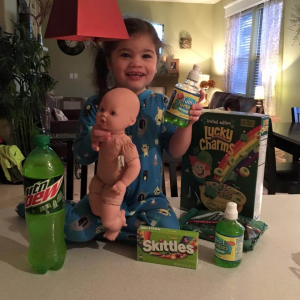 At Helen Baller, first grade teacher, Diane Loghry, used to have her students use their imagination to create their own leprechaun traps.

Do you have any fun traditions on St. Patrick’s Day?

St. Patrick’s Day celebrates the Roman Catholic feast day of the patron saint of Ireland. St. Patrick died on March 17, 461. But did you know that he wasn’t even Irish? Here are some fun facts about St. Patrick and this fun day.

History, according to National Public Radio:

Patrick’s birth name was Maewyn. He was born in Roman Britain. He was kidnapped into slavery and brought to Ireland.

He escaped to a monastery in Gaul (France) and converted to Christianity. He went back to Ireland in 432 as a missionary. While Christianity had already taken hold in the country, tradition has it that Patrick confronted the Druids at Tara and abolished their pagan rites, making Christianity more widespread.

Patrick became a bishop and after his death was named Ireland’s patron saint. Celebrations in Ireland were understated though. When the Irish emigrated to the U.S., they created the bigger celebrations and parades known today.

Eighteenth century Irish soldiers who fought in the Revolutionary War held the first St. Patrick Day parades. The celebrations became a way for the Irish to connect with their roots after they moved to America.

The shamrock: According to legend St. Patrick used the three leaf clover (or shamrock) to explain the Trinity.

This website has some fun information about the holiday: http://www.theholidayspot.com/patrick/historyofpatrick.htm

TICKETS NOW ON SALE FOR FILMED BY BIKE FILM FESTIVAL