The Camas girls basketball team rallied from 12 points down at halftime to get within one point of defending 4A state champion Kentridge in the semifinals of the bi-district tournament Friday, at Puyallup High School.

“From the beginning, we all had that heart and desire,” said junior guard Haley Hanson. “Who cares if they’re state champs. We work so hard in practice. Our scout team got us prepared for this physical game. We just pushed through all the pain and frustration.”

Hanson nailed four 3-pointers for the Papermakers in the second half. Marianna Payne and Jillian Webb added two threes each, and Jordyn Wilds netted one.

“That’s the reason we play basketball. That team chemistry keeps us alive on the court,” Webb said. “Those threes came from all five of us. It wasn’t just Haley and me. That was a whole team effort.”

The Chargers never lost their advantage, outscored Camas 18-8 in the fourth quarter and celebrated a 65-50 victory.

“We caught up to them, we just couldn’t keep it. But we tried our best, despite the fact that we were a bit undersized,” Payne said. “It was a very physical game. A lot of us came out with battle scars.”

Haley Hanson connects on her fourth 3-pointer in the second half.

The difference of the game was foul calls. Kentridge earned 30 free throws and made 18 of them. Camas only received one shot from the line, and it came on a 3-point play converted by Payne.

“When you come up here and you play Kentridge, you’re not going to get too many calls your way,” said Camas head coach Scott Preuninger. “Even though they were the more physical team, they weren’t getting fouls called on them. It is what it is. You just got to play.”

And play the Papermakers did.

Payne and Maggie Wells bounced off the walls, while they made baskets and grabbed rebounds. Freshmen Faith Bergstrom and Jalena Carlisle provided productive minutes when Courtney Clemmer got into foul trouble. Hanson tweaked her elbow, but got right back into the game.

“Just great effort,” Preuninger said. “They played about as hard as they could.”

Kentlake also beat Camas by one point in the state regional round last season.

“Our girls are ready to play Saturday,” Preuninger said. “It’s going to be a lot of fun.” 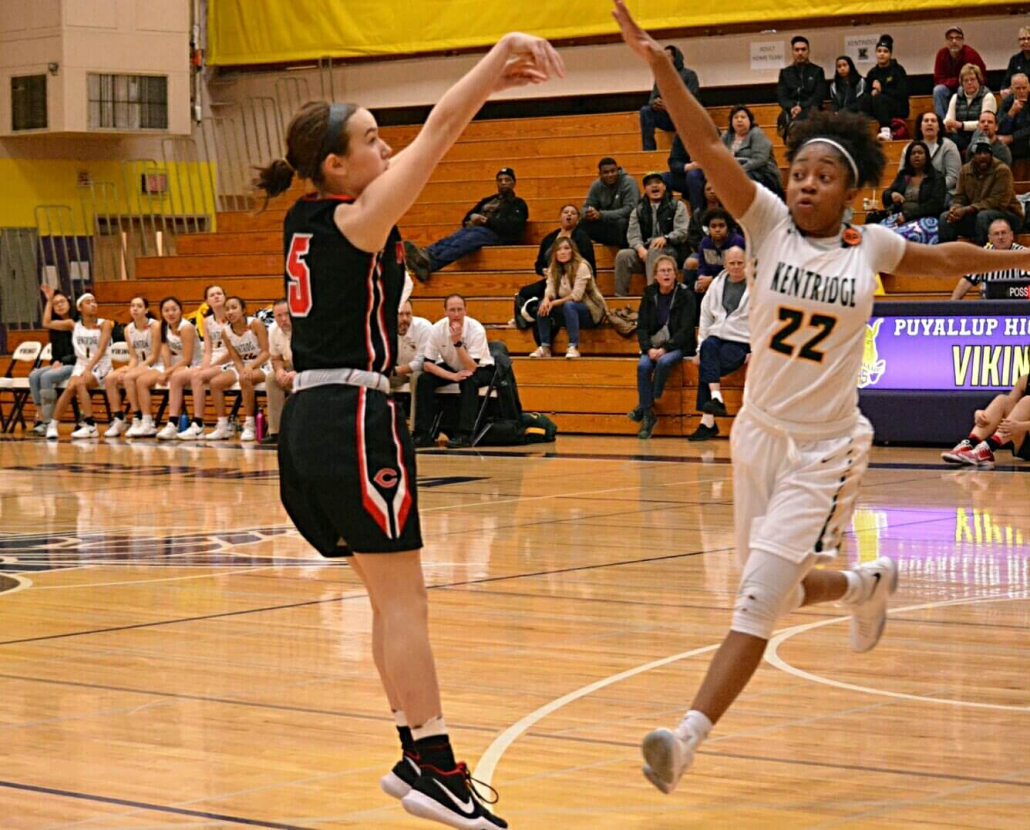 Maggie Wells shows no fear against a 6-foot-4 Charger.

Back to Where They Belong: Panthers Play for 3rd Place Saturday