The existing 2,400 square foot library, which was built in 1981, is cramped quarters and isn’t adequately serving the local community as Washougal has simply outgrown it. The Washougal Library is part of the Fort Vancouver Regional Library (FVRL) District, which stretches all the way to Goldendale.

“We are getting the word out that we need a new library,” said Ries. “To help us with the constraint, communities members like Alex Yost are putting up pop-up libraries around town.”

Ries reported that a recent study indicated they need a 10,000-12,000 square foot facility, with a projected cost of $4.5 million to build from the ground up. $1.1 million has been set aside by Fort Vancouver Regional Library for the new Washougal building; $157,000 has been raised by private donors; and they raised a little over $30,000 at the 2018 Dinner in White on the Columbia.

A new library would do the following:

The Washougal Library wants to have a space in downtown, and either wants to build from the ground up, or find a lease to own space in a multi-use partnership.

As part of their fundraising efforts, the Friends of the Washougal Community Library is hosting a book sale on September 28-29, which will be on Main Street at the corner retail space across from the post office. Hours are 9-5 on Friday and Saturday. On Saturday, from 4-5 pm, there will be a bag sale. It’s $3 for the bag.

Why are they scrambling to find money?

“In our district, we also have three other building projects — Woodland, Ridgefield, Washougal, plus the library system will have to relocate their headquarters, so there is a lot going on,” said Ries. “The headquarters is being encouraged to move out faster than our lease stipulates. And, we are trying to do this without asking for a bond. We have limited options of where to build it.”

A lot of libraries around the country are closing. Is there a risk of local libraries closing down?

“The answer is no, here locally,” said Ries. “There is more use of e-books, but people will take what’s most readily available. The trend toward ebooks is with an older population. They would also like to have writer’s groups meet at the new facility. Kids are reading many books.”

Ries said they haven’t set an actual goal of when to have monies raised or when they’d like to build it, but they are working hard to get to the estimated $4.5 million cost.

“Every year the cost goes up,” Ries said. “That is from ground to completion — on our own. If we could use an existing shell, the cost would be less.”

Rachael Ries explains what is happening with the process to build a new library. 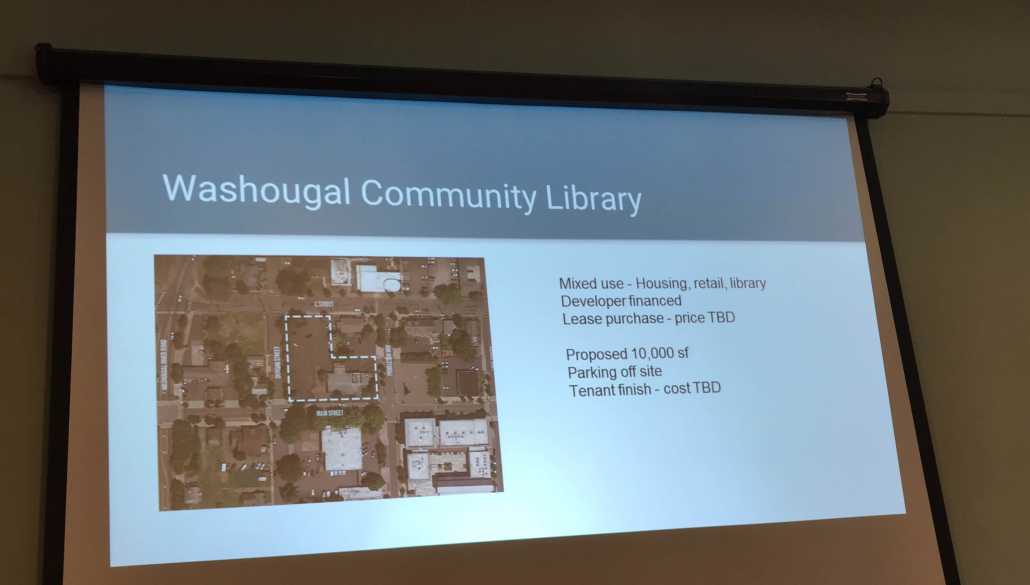 A potential location for a new Washougal Library.