Her book, “The Lavender Soul,” released in April through PelianWords Publishing House, is a fantasy novel about a young girl born with lavender eyes, portending she will be the annihilation of evil, or the impetus of world-consuming darkness. It is an adventure through a fantastical world with reimagining of classical characters, such as fairies and dragons, along with new beasts crafted from Walsh’s imagination. It’s about the main character, Vera, who is seeking out her purpose.

Now living in Lompoc, CA, Walsh is in town for the Portland Book Festival, and was invited to spent time in her hometown.

“I’m here to talk about dreams and how you can help them come true,” said Walsh. “I was a senior, and had my life plan right on track, and I had already applied to several universities. I was set. I was ready to go to Chapman to study Music Therapy. Chapman said they were ending the program, and that affected my scholarship. I was high and dry, and my mother had to call and begged to get to other schools. I had worked for years to become a music therapist, so I decided to become a Humanities major and went to Concordia in Southern California.”

She appreciated the experience, and was able to explore many things.

After earning her Bachelor’s Degree in Humanities Creative Writing from Concordia in 2011, she spent 18 months writing “The Lavender Soul” after spending eight years imagining it. Once completed, she went through the agony of finding a publisher, and after 38 rejection letters, she found a home with PelianWords Publishing House.

“I am fully able to admit that I felt like a failure because it really hurts when people say no,” said Walsh. “But failure isn’t real. You can fail because you didn’t pass a test. If you choose not to learn from the failure, then it’s a real failure. You have to learn from it.”

She said there’s “one key to success in any field and that is imagination, which is key to making all of your dreams come true.”

She encouraged the middle schoolers to always have imagination. 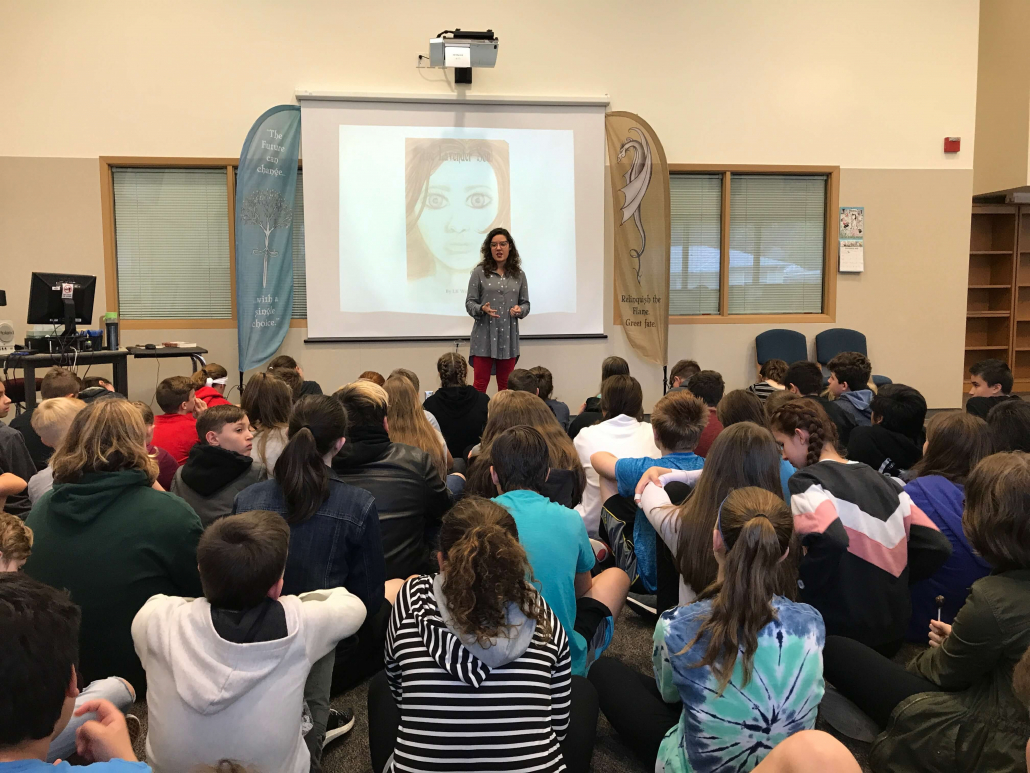 “Logic, science and math are not separate from imaginations,” she said. “Sometimes people give up on their dreams because of money. Authors don’t make money. My dream is to create worlds. My dream is to spread imagination. Dreams have such great value because it takes courage to dream. Every time you have a thought it creates a physical pathway in your brain. The easiest thoughts are negative ones. It takes imagination to be positive. Imagination gives you the courage to dream. Dreams don’t always have to be those huge paychecks. They don’t even have to make sense.”

Walsh has spent the last several weeks traveling to promote her book, and is working on a prequel, which has been approved by her publishing house.

To learn more, or to purchase her book, visit www.lkwalshauthor.com