Book author Pat Jollota is at it again, with her just-released, well-researched, and riveting historical account of a murder case that rocked Vancouver in the 1950s. “The Murder of Joann Dewey in Vancouver Washington,” published by The History Press, is a decade in the making by Jollota, 81, a retired Vancouver City Councilwoman, museum curator, and the author of seven books.

Always a character and full of life, Jollota, walked us through the nuances of the case of 18-year-old Joann Dewey, whose Vancouver kidnapping in 1950 was on full display by upstanding citizens who did nothing while the young woman, who was just 60 feet from her destination, fought for her freedom.

It’s the story of a life cut short, the craziness of a criminal investigation that included the arrest of the investigating sheriff, and the ultimate convictions of two brothers, Turman Wilson, 26, and his brother Utah, 18. They would eventually hang for their crimes.

“The crime happened at 13th and D Street in Vancouver,” said Jollota. “On April 22, 1950, the victim, 18-year-old Joann Dewey, was just 60 feet away from St. Joe’s Hospital when she was grabbed by these two guys — in front of two upstanding citizens. She was fighting and screaming and they told her she was Utah’s wife and that she had too much to drink. It’s tragic.”

It’s a complicated case, said Jollota. The Sheriff had no police experience, and was tried for public intoxication. He had been the director of Labor and Industries for Washington. The prosecution was praised for its work, and the case even brought in Earl Stanley Gardner, author of all the “Perry Mason” books. Gardner wrote a report about the investigation, and he had nothing but praise for the Vancouver Chief of Police and veteran prosecutor, RD Jones.

“This whole crime is fascinating, and I was riveted by it,” said Jollota, who spent many years researching to write this book. “We’ve had pretty strange crimes around here.”

And, it gets weirder.

“At one of my book signings, the Wilson family came, and they stood right behind me,” said Jollota. “They believe their family was framed. So what I did, I gave them a little time to present what they believed, and then they were content. They bought two of the books. This was Saturday at Vintage Books. This whole case is weird, the trial is weird, the investigation is weird. 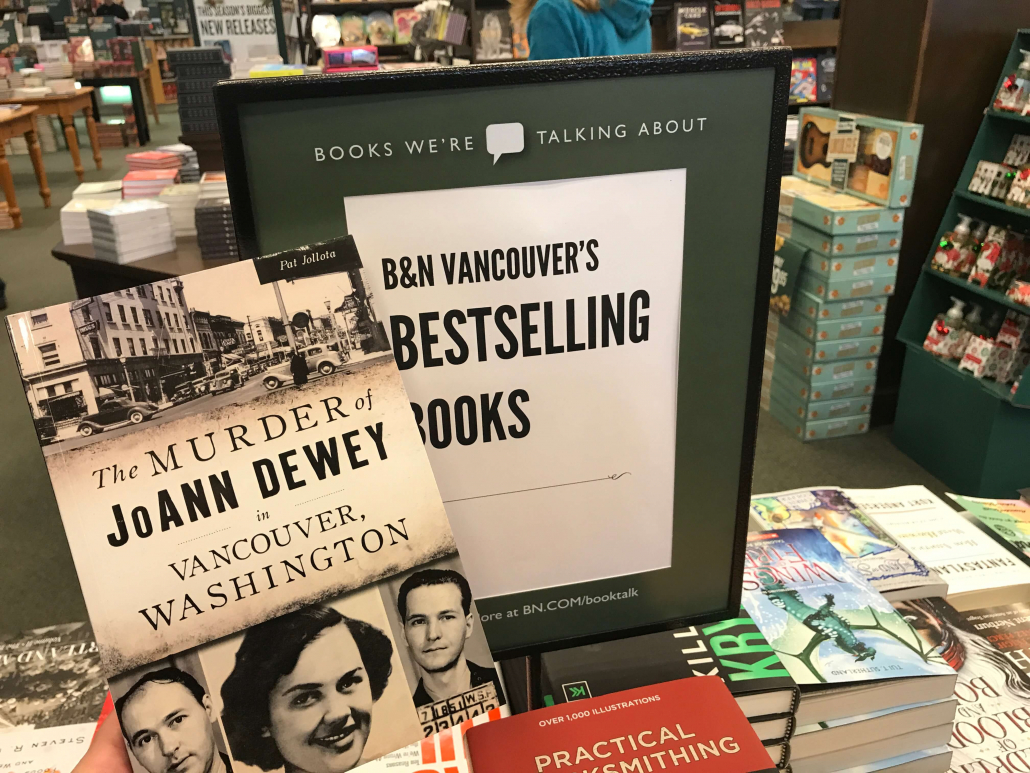 “The Murder of JoAnn Dewey” is available at Barnes and Noble.

“If I had found one shred that pointed to their innocence I would have written it that way, but all I found was pointed to them. They had incorrigible evidence — a beer bottle with big bubbles in it, with fingerprints on it.”

And, she said it fits a pattern of criminal behavior.

“Ten years before three of the brothers were in an almost an identical crime, and they were sentenced to an Oregon penitentiary,” said Jollota. “The oldest brother was killed in World War II. The family had a history of crimes, including a pardon by Oregon Governor McCall for Rassie.”

Jollota did extensive research for the book. She started day by day in her role as Clark County Historical Museum curator, and found the stories in The Columbian archives. The more she dug, more facts emerged. It took her about a decade to do the research.

In February 2018, she was approached to write the book, which took three months to complete.

“I just focused on writing every day,” she said. “My challenge was to take all of these stories, the trial, the crime, the investigation and weave those together in a way that made sense. The trial was five weeks long, and trying to make sense of that was a challenge. I asked Judge Suzanne Clark to read it, and she did. She just changed some of the phrases that a judge would use. She was kind enough to do it for me.”

“She never had a chance at love, at getting married, at raising a family, or starting a career,” said Jollota. “I want people to remember her.”

The book is available at Vintage Books, Barnes and Noble, Philbin’s Hardware, and, of course, www.Amazon.com

On November 24, Jollota is going back to Vintage Books for Small Business Night.

The book was released on October 29.

Washougal Transitions to Council-Manager Form of Government
Scroll to top