Camas, WA — Former Seahawks star running back Curt Warner and his wife, Ana, along with writer Dave Boling, are excited to officially release their new book, “The Warner Boys: Our Family’s Story of Autism and Hope,” this weekend.

Published by Little A, an imprint of Amazon Publishing, “The Warner Boys” is a raw, emotional depiction of the reality of dealing with twins with severe autism, and the closeted life that ensued.

Ana has dedicated her life to the care of her family, and the study and treatment of autism spectrum disorder. Both have served as keynote speakers at the National Autism Conference at Penn State, and the Texas Autism Conference in San Antonio.

The couple were prominent figures in Seattle during the 1990s, and when they dropped from the public eye following Curt’s retirement, the reality of their situation was a closely guarded secret.

“When Austin and Christian were born, everything seemed normal,” said Ana, who was already the mother of 18 month-old Jonathon. “But as they got older, they were really hard to control, and were nothing like Jonathan. By age 2, we started noticing really odd behaviors. They were very hyper.”

Ana said they wrote the book in part to explain why the disappeared from people socially.

“We were forced to isolate ourselves for their safety,” said Ana. “We were in survival mode for a long time.”

Curt said the book is also a story of hope.

“We take them from diagnosis at age 5 and prior to that the issues we were dealing with, and where we are today,” he said. “It’s not a fix-it book, it’s a book that is testimony of what we’ve been dealing with for the last 23 years. We just happened to find the right channels from point A to point Z. We ended up speaking at a 2013 Autism conference at Penn State, and after that we realized we do have something to share with people who are going through this. We are able to help people, and to promote awareness because there are families dealing with the autism spectrum and still looking for answers. We can relate to families coping with this. Ultimately, you’re not alone when it comes to this.” 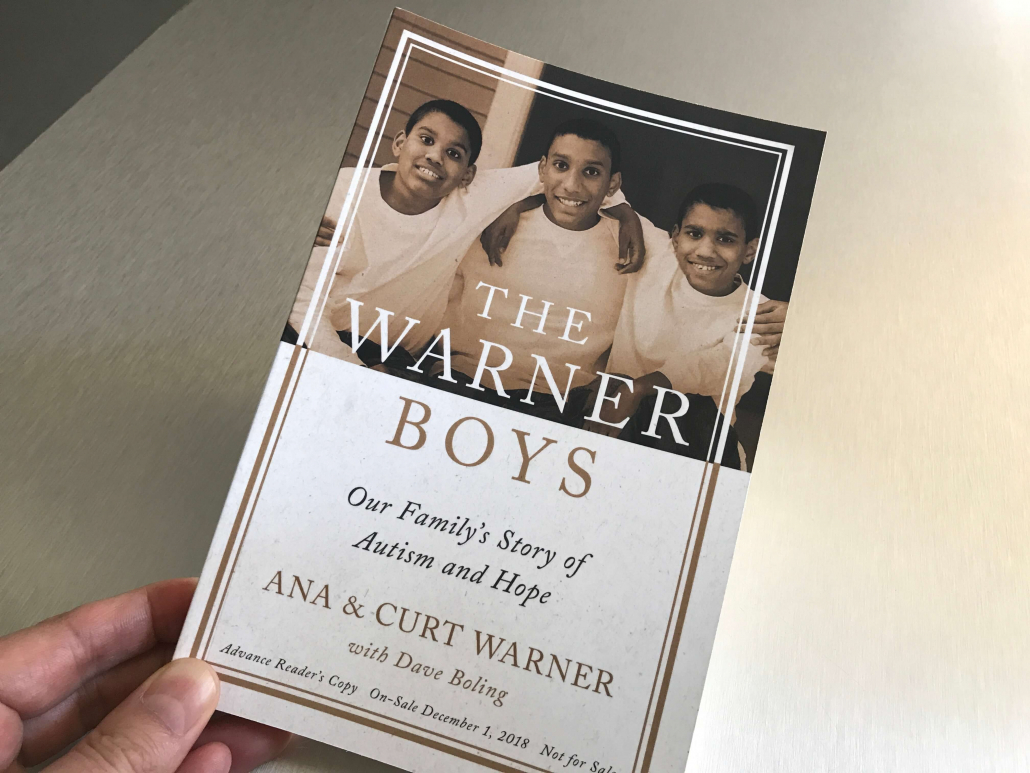 Their new book is available at www.Amazon.com

Ana explains the autism spectrum of 1-10, with 10 being severe.

“You have people who can go to college and be successful and you have the other end of the spectrum,” she said. “We are at the 7-8 of the spectrum. Our kids are probably in the more severe end of spectrum. They need 24-hour assistance.”

Like the book, during our interview the Warner’s were very raw and candid about their daily struggles. During the two-hour interview, Curt acknowledged the daily roller coaster ride.

Ana said she escapes through sleep, and they are currently going through times when they can’t take the boys out.

The book addresses the physical activities they do, and what foods work best. The couple provides counsel to other families, and encourages families to never give up.

“Our advice would be to not give up on your child or your marriage,” said Ana. “Try not to isolate yourself (like we did) and ask for help. In the case of someone who had never encountered anyone with autism before, be kind, don’t judge, if possible try to help.”

You may purchase the book here: The Warner Boys

“Water”: New Public Art to be Unveiled in Washougal Saturday
Scroll to top