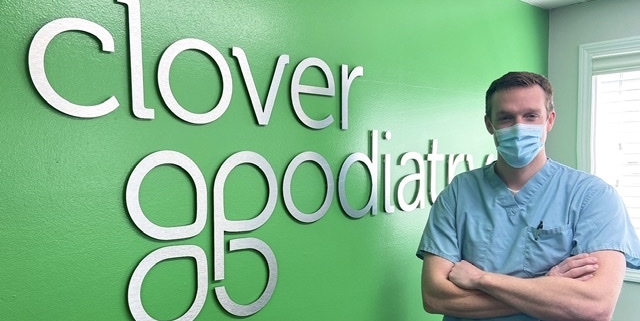 A foot and ankle surgeon, as well as a foot and general physician, Dr. Fish treats any issues and ailments from the knee down, which includes skin, muscles, bones, and tendons.

He said heel pain is the same as plantar fasciitis — it’s an overuse injury of the heel, usually from tight calf muscles.

“It happens when you puts too much stress on the tissue on the bottom of your foot,” he said. “It comes from being on your feet too much and not having the right support. Orthotics and stretching are some of the best ways to prevent it. Shockwave therapy is one way to treat it.”

His clinic also treat ailments that require surgery, such as ankle fractures, bunions, hammer toes, wound care, and trauma. Hammer toes is an imbalance in your foot muscles and results in your toes curling up. People with diabetes get it, too, and it’s corrected through surgery.

“It’s a fairly simple surgery,” he said “Almost all surgeries I perform are at PeaceHealth.”

He also treats sports injuries like turf toe or ankle sprains, fractures, and shin splints, “which we try to manage with conservative care.”

Dr. Fish also encourages patients to wear medical grade orthotics, which are pre-fabricated and available at his practice for 1/3 of the price.

The move back to the Pacific Northwest in July with is wife Kimberly Fish, a Physician’s Assistant, and his toddler daughter, Devri, was a homecoming for Fish, who grew up in Hockinson.

“We moved back to the Pacific Northwest in July, bought the building on September 1 and spent a couple months renovating it. I grew up in Hockinson, went to Heritage High School, attended BYU (competed on their track team and studied landscape management), then I went to podiatry school at Kent State U, College of Podiatric Medicine in Cleveland, Ohio, and graduated in 2017.”

Dr. Fish stayed in Cleveland for three years of surgical training, and then decided plant roots once again in the Pacific Northwest.

“We plan to be active in the community, and we’re just really happy to be here,” he said.

He also has his own blog, which you can read at his website: www.cloverpodiatry.com