In his speech, Knight said he’s pleased with the strength of Clark College, which was established in 1933.

“The way we teach is changing,” said Knight. “And, our teachers are some of the best out there — I know our students are getting a quality education.”

He said two-year colleges like Clark address a demographic of youth that aren’t ready for the size of four-year universities.

“We get them ready, and with our small class sizes, around 20 students per class, teachers get to know the students by name,” said Knight. “And, as parents we’re saving you a lot of money. They’re getting the same quality education as they would at a large university for these first two years. They’re the same classes. Then you can go on to become a Duck, a Beaver, a Huskie, or a Cougar.”

He also discussed the growing demand for vocational education, and wants to change the attitude toward trades.

“Parents need to know there’s a growing demand for these kinds of jobs, and they need to know they’re paid high wages,” said Knight. “So we’re working on changing those perceptions. We also need to think about going to school year-round, instead of taking summers off. That’s a old way of thinking.”

Rotarians also honored Yozen Fang, a soft-spoken Camas High School sophomore, as their club’s Student of the Month, for his academic achievements.

“Students are always given praise by staff,” said Rotarian, Ron Carlson. “According to your teachers, Yozen, they say you’re an inspiration to the work ethic of CHS. Your ability to experience defeat and never give up is amazing. You are very successful, and … you are slowly … shedding some of your shyness in the school. Another teacher said ‘underneath that quiet exterior is a sharp and witty mind. He diligently works on his work and is faithful to every teammate he works on in his research projects. While he is quiet, his math work is excellent. He is very talented, very bright.’”

Fang said he loves to go on long walks, and read. 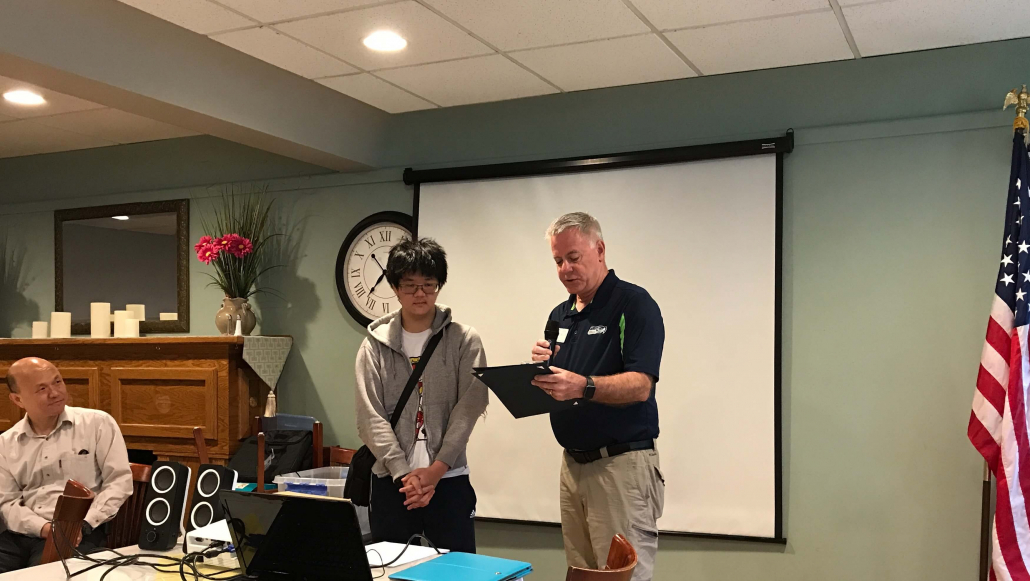 Camas High School sophomore, Yozen Fang, was recognized as the Camas-Washougal Rotary Club’s Student of the Month at the group’s weekly meeting.