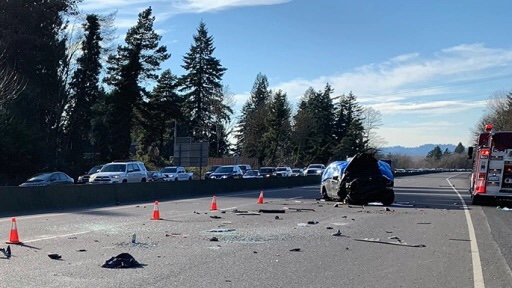 According to a Washington State Patrol crash memo, the victim is identified as Mary A. Levey. The memo said firefighters and law enforcement were dispatched at about 12:30 pm to Milepost 12.

The crash memo says Levey was westbound on the highway when she drifted to the right shoulder of the highway, overcorrected and crossed the lanes.

According to State Trooper Will Finn, Levey crashed into a jersey barrier and rolled her SUV several times which blocked all westbound lands for close to 3.5 hours.

Drivers were asked to use alternate routes, which caused massive traffic jams, as investigators reviewed the crash scene. Eastbound traffic also backed up.